I don’t think he REALLY was going to shoot me. But the look was pretty menacing. (Mt Crater, village of Lufa

Papua New Guinea is an incredibly diverse country, with an estimated 800+ identifiable groups / communities / traditional societies of people.  For a country of only about 6 million, the results are a riotous melange of languages, traditions, costumes and behaviours.  As I live and work in Port Moresby, and rarely get to travel to the ‘real’ Papua New Guinea, it is difficult for me to appreciate this incredible multiculturalism.

There are certain traits that one can pick up – people from the ‘Highlands’ provinces tend to share certain physical traits that distinguish them from ‘Coastal’ peoples.  But to figure out where someone is ‘from’, at least for an outsider such as myself, requires a conversation. 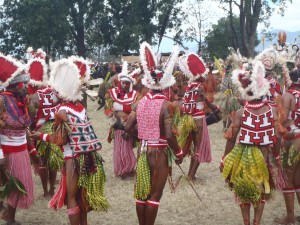 Or you can attend a Sing-sing, of which the Goroka cultural show is probably the biggest and best.  Every year, around the time of the celebration of Papua New Guinea’s Independence (September 16th), people from all over PNG descend on the city of Goroka in the Eastern Highlands Province, to dress in their traditional costumes, and to sing and dance in a celebration so loud, colourful, and feather-filled that it rivals any Mardi Gras I’ve ever seen.

For the budding anthropologist who wants to check out these unusual cultures, getting there is half the fun. There are flights to Goroka, but domestic travel in PNG is an art, not a science. Planes seem to fly according to the whims of the two carriers who operate. Business drivers randomly require that a whole flight be booked out to ship people to a gold or copper mine, bumping everyone else. Anyways, if you want to go, plan to be in PNG around September 16th.

Fly to Port Moresby and try to spend as little time there as possible. For a tourist, there is little to offer in POM, and a couple of days is all you need in order to tick the box.  Furthermore, this is an expensive city – expect to pay $400 USD+ a night for a hotel.  We were able to get a weekend package for Goroka for about $1000 USD a person, including air and hotel.  We could’ve trimmed a bit off this price staying at a more downscale property – but in the end, having everything looked after for us was worth it.  If you want to travel independently, I recommend the Paradise Gardens Hotel.  You don’t have many choices of hotel in any event.

Goroka is not a large city, and it sprawls out from the centrally located airstrip. We felt totally safe walking around the city during the day, and very much welcomed.  That said, there were security incidents – there were audible gunshots on one night, and tear gas was used in the streets to curb gatecrashers at the festival.  However no Westerners/tourists were affected by these incidents. It’s safe – honestly!  Safe enough that the usually locked-down LNG Project people were able to attend the festival. It costs 5 Kina (about $2) to attend the festival, but you’re stuck in large crowds, and kept off the grounds until the afternoon.  A better deal, especially if you’ve gone to this effort to attend such a remote event, is the ‘VIP’ pass.  For 100 Kina ($40) you get to walk among the performers right on the field, snapping as many pictures as you want.

This style of facepaint is common to many Highlands groups.

I’ll let the pictures and videos speak for themselves as to WHY you would want to attend.  Most of the groups carry a sign identifying who they are, and where they’re from.  This may not mean much, as some of the cities I couldn’t even find on a map when I got back to the office. What is missing, is that no one offers any explanation of what the dances and costumes mean. Hopefully in future years, a network of knowledgeable guides will spring up to help curious tourists learn more about this country of surprises.

These people were chasing the Ewok-looking creature during their dance.