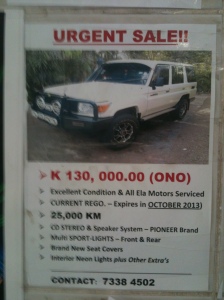 As I’ve mentioned before, everything in this country is shockingly expensive, cars being no exception. Since there is no vehicle manufacturing industry here, all vehicles are imported in by ship. And for whatever reason, the government taxes the hell out of them upon import – with duty and tax rates often exceeding 100%.

As a result, cars that wouldn’t even be saleable in North America, or at least would be given away to one’s 16 year old niece or nephew, have a tremendous value here. As an example, I was recently following a clapped-out late 90’s Toyota Corolla taxi, with quite a bit of body damage, a smashed-in windscreen, and presumably very heavy mileage, with a sign in the back ‘For Sale, 14,000 Kina’ (about $7000 USD.) The ad I’ve attached here is from a bulletin board at a grocery store, for a Toyota Land Cruiser, in pretty good nick, but still several years old (I’m not sure the model year), for 130,000 Kina – $65,000 USD. Comparable cars in the US would sell for about $25,000 USD.

Anyways, my project is growing and I have more consultants on board, so we needed a car, taxis being somewhat impractical. A small SUV suitable for multiple adults, with light 4X4 capability would go for around 30 – 35,000 Kina, already landed in country. Popular cars here are Honda CRVs, Toyota RAV4s, or Nissan X-Trails. I wanted something a bit more beefy, as there are lots of hills, and I’ve noticed some of the 4-cylinder SUVs are a bit gutless. So, where does one turn in PNG to get a deal on a car? Japan’s garbage, naturally!

The Japanese regularly sell off their used cars to overseas buyers, often in developing countries. Several websites exist, and I browsed a couple and decided to buy a Mazda Tribute with a 3L V6 engine. The 2003 vehicle was in good cosmetic condition, with fewer than 50,000 kms, good rubber, no mechanical issues (these vehicles are pre-inspected before listing) and the retail price was $2900 USD, FOB Yokohama. And here is where the fun and games begin…

The costs start to add up (USD estimates):

This still isn’t bad – I would expect to pay $15k – $17.5k USD locally to buy the same vehicle here in PNG from someone leaving, or off a car lot.

The real fun is in the process. I didn’t want to use my ‘connections’ (I work in an area that interacts closely with Customs) to expedite matters. In countries with corruption problems, I prefer to run the course just like a ‘normal’ person and see as best I can, where the opportunities for corruption arise, and indeed, if I’m asked to ‘facilitate’ something along the way. I hired a local broker, and he managed much of the process, up through to the point of payment of the Customs duties. At this stage, frustration set in. I had paid the wharfage fee by bank transfer, and that hadn’t hit the PNG-based bank. So two days ago, I decided to pony up the cash, and told the broker to refund me once the payment hits my account. (We shall see if I ever see that $470 ever again.) Then, one day ago I was told I had to pay a storage fee, since Customs had taken so long to clear the vehicle. The vehicle arrived on Jan 14th, but it took until Feb 1st to actually take possession. So again, I had to run to the bank machine, pull out some cash, and pay the fee. Since this took us past 1500h in the afternoon, even though I had all the paperwork and payments made, I had to return the next day to get the car. 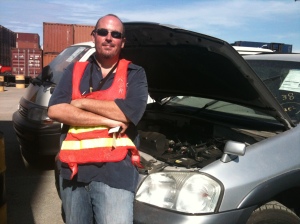 Me and my new duds

Arriving at the port at 0900h,first in line, I was told I had to get a security pass to enter the port. This involved finding the security office, which is any one of four offices down the road. After walking around and finding the office, I was given the chit of paper needed, and I returned to the port. Only to be told that I needed to be wearing a safety vest to enter the port. I asked the guard if I could borrow one, and after much fooling around, vests were procured (naturally, PNG-sized, not large white male -sized.)

Then off I went to the Port facilities office, where after much handshaking and fussing with paperwork, signing of bits of paper, and filling out of ledgers, I was given the keys to the car.

Heading out to the car, everything seemed to be in order – the car looked pretty darn good considering it was none years old and just sailed for several thousand kilometers. I put the key in the ignition – and click. The battery was flatter than a non-lip synching Beyonce. Fortunately, the wharfage guys can smell a tipping white guy a mile away, and a legion of eight Papua New Guineans lept into action to arrange a jump. After about 15 minutes of pushing cars around, and using some rather dodgy jumper cables, the car had juice – however, it was also out of gas. Again, sensing a money-making opportunity, the Legion of Eight piled into a Customs vehicle; 20 Kina in hand and an empty juice bottle, to go fetch two liters of fuel. Upon their return, they asked for two Kina for some betelnuts, which we happily forked over. Indeed, we gave them 50 – we actually got some service out of these guys. 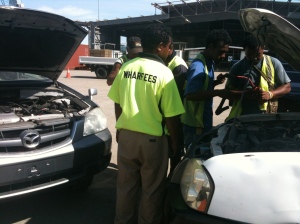 It takes a lot of people to jump a car.

Long story short – my project now has a car, and we are free to explore Port Moresby and environs with a bit more flexibility. As for my days of importing used cars into PNG – I think I’ll leave that to the experts. Oh wait – I am an expert now!

Like Loading...
‹ Cruising, With Cabins, Size Matters….
I love cruising, but I may not be the best roomie ›