Home › Friends › My towel pet Kevin, and why I am a misunderstood visionary

My towel pet Kevin, and why I am a misunderstood visionary 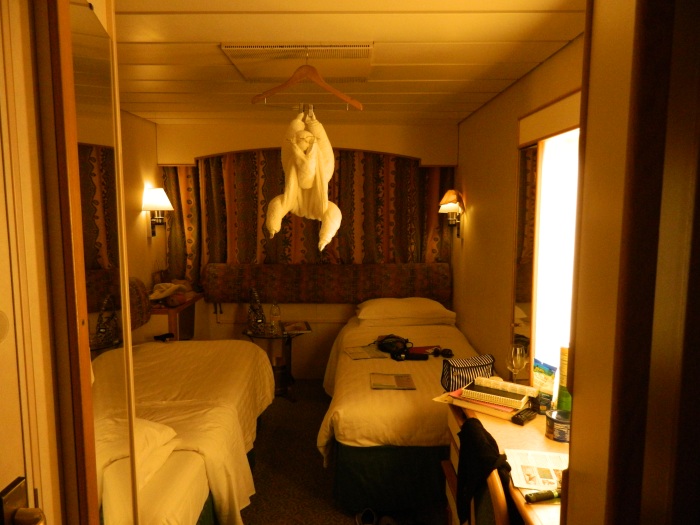 a sloth? or monkey?

I’m filling in a bit for Naomi as she is still enjoying the cruise/Florida vacation. I’m back home, so thought I would share a bit about how I will always be the nerd in any situation.

Above you see a photograph of our cabin. I was a bit leery of how 2 women would manage in such a small space. However, the cabin had lots of storage, and I soon came to enjoy our small cocoon. It was quite relaxing, rather like camping, and I found it very easy to sleep there.

You also see the famous “towel animal”. If you have ever cruised you know that many lines during “turn down” service make a towel animal to greet you. I’ve heard they used to only do this for cabins with children, but they were so popular that soon everyone had a happy towel animal. I love them. It’s fun to go to your cabin in the evening to be greeted by a rabbit, elephant, snake, swan or even a “mystery creature” such as the sloth/monkey.

Jeff Wagg, who runs College of Curiosity tours, would give us a fun newsletter update each evening. There was always a puzzle, a fun fact or two about cruising or where we were headed, and a suggestion for a fun activity we could do. One day there was “Make a towel animal for your room steward! Take a photograph of it.” I was “This is going to be fun!” I made a rather mysterious creature the elephant/aardvark. I took a photograph and was rather proud of myself. This starts the “I will always be the nerd in any group” part of the story.

behold the elephant/aardvark!
I still am glad I created him.
His name is Kevin.

That day we had a lovely meet up of our group. You have to understand our group is made up of skeptics. They got excited when they see people playing role playing games on the ship. Members of the group go to Dragoncon. We are, for the most part, a relaxed laid back group that would rather wear shorts and sandals than a prom dress to cruise dinner. (Please note, there are exceptions such as my lovely cabin mate Naomi who is known for her style and sophistication in all situations). The group met in a conference room and as we talked I noticed that no one was sharing their towel critters. I finally spoke up and said “Hey, I made a towel critter!” There was a moment of confusion and I said “Remember, it’s in the newsletter, Jeff suggested it!” No one else had made one. Actually one person had (the lovely and fun spirited Jenn,who works with children…which may explain why she and I get along so well) but she had not taken a photograph. I proudly showed off my critter anyway, while poor Naomi was left to explain “She’s an artist…” Sort of a “there is an excuse for why she actually did this thing!”

It took a bit for me to pick up, but this was the nerdy thing to have done. In a group of nerds, it’s hard to do anything that can be seen as nerdy. I had successfully done so. This proved to me, I was truly a visionary ahead of my time as even the greatest minds could not understand my work. I liked Kevin the aardvark/whatever.

When I returned to the room the cabin steward came in and I proudly pointed out Kevin the critter. He was, slightly taken aback. No one had ever made a towel critter for him before it seems. He is paid to be nice, but there was a moment of “No one has ever done this, oh my.” shock. Once again I was thinking “This is a ship full of women wearing purple dresses and red hats, and this is the weirdest thing you have ever seen?” He soon recovered and said “Oh it’s too bad I don’t have my camera” as he backed out of the room. I personally believe he was so AMAZED at Kevin as he was SO SUPERIOR to any towel critter EVER MADE that he was speechless and forgot to tell me how I was a misunderstood genius.

I also believe that Naomi was explaining how indeed, I AM AN ARTIST, who like many cutting edge artists can only be understood after I am dead. One day, Kevin, who sadly only exists in photographs since even Naomi could not truly appreciate him and took his head so she could take a shower, will be given the honor he deserves. I will be seen as another tortured visionary, and not just a story told in the cabin stewards rooms. (“You will not believe what this woman made, she said it was for me to appreciate. Don’t those passengers know how much we hate making those stupid towel critters?”)

It’s hard being ahead of your time….