Home › Food › To the End of the Earth for Wine

To the End of the Earth for Wine

First section: This serves very simply as a no-spoiler tip sheet for how to get to Vina Artesenal Gonzales Bastias, located in the Maule River Valley.

*Plan on a 90 minute to two hour drive from Santa Cruz, Chile.

*Follow your GPS co-ordinates / navigation to the town of ‘Gonzales Bastias’. While the distance is not great, the roads are VERY rough. Carry a spare tire and a jerrycan.

*Arriving at the town, go to the one restaurant and ask to be taken to the winery.

*You are rolling the dice if you arrive unannounced. You are best to email the winery at least one week ahead of time (they only check their emails once a week, and have no phone or internet connectivity at the location, and no intentions of getting any soon.)

If you want to read about all the details / surprises that await, then read on. If you’d rather discover this for yourself, then read no further.

I’m a bit of a wine nut. Not a true oenophile, and I certainly don’t have a refined palate and nose. But I like wine. No, I love wine. And I like to discover new wines. So recently, when I had visitors from California (who are much bigger wine geeks than me) and we went on a road trip to the south of Chile, we wanted to taste a LOT of wines. And we did: over 65 different wines in two weeks. My liver has almost recovered. 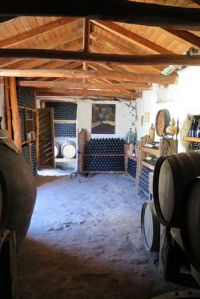 The story of Chilean wines is a strange one. Wine has been made in Chile for hundreds of years. Presumably, when the Spanish arrived nearly 500 years ago, they brought wine-making to Chile, and it was changed/modified by visitors from France. Several wineries in Chile boast of vines that are more than 200 years old. Chile also is home to at least one strain of ‘old world’ grapes that no longer exist anywhere else – the Carménère grape.

Carménère was wiped out by phylloxera in France, but the vines in Chile were unaffected. If you want Carménère wine, you have to come to Chile. A similar revival is taking place in Chile with their Carignan vines. But this story isn’t about Carménère or Carignan – you can read all kinds of snooty wine snobby articles about that elsewhere.

This story is about an even lesser-known grape called ‘Pais’.

For years, Chilean wine was known as the hooch of the winery world. The focus was on cheap plonk, bulk wine, sacramental wine, and producing wine which was then turned into ‘Pisco’ – a liquor very popular in Chile, and quite recently, making a bit of a stir on the global cocktail scene. But the refinement and richness of French, Italian and Spanish wines was never applied to Chile. Chile made good cheap ‘Lightning Creek 20/20’ style wine. And the grape of choice for this, was largely the ‘Pais’ grape, grown in the scorching heat of the Maule River valley. 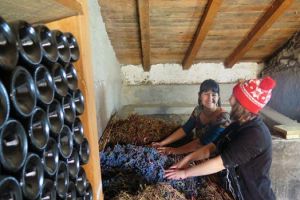 Pais is still grown in Maule today, and there are still wineries turning out the same low-end wine, often using barrels which are hundreds of years old. Indeed, as you drive to the winery, you’ll pass by some heart-achingly quaint and magnificent old vineyards doing just that. And the locals all have pretty gnarly noses, presumably from sampling a lot of Pais wine.

Vina Artesenal Gonzales Bastias is a rather unique place. We only heard about it, because at one of the hoity-toity wineries we visited in the Colchagua valley (Laura Hartwig winery – and if you can find her wines, drink them!) we asked ‘If you wanted to visit the strangest, smallest, most unique winery in Chile, where would you go?’ Without hesitation, the response was ‘Vina Artesenal Gonzales Bastias’! By way of direction, I was provided a Facebook group. So – that was it. I visited the Facebook site, and using my broken grasp of Spanish, a dodgy five-year-old Garmin GPS, a three- year-old map book from a gas station, off we went. It looked like we had about a 40 km drive ahead of us. Everywhere I asked, in my charming gringo Spanish, the people all knew about Gonzales Bastias, assuring us that we were just 10 minutes away, and pointed us in the right direction.

Author and friend on trek to find the perfect remote wine

Even when the roads ended, and we were driving on narrow goat paths on the sides of mountains. Even when there were no road signs saying where we were, or indicating what the next town was. The story was the same ‘Si, Gonzales Bastias. Cinco kilometros, a la derecha’. As the road trip continued my resolve to find this winery was retrenched with every dodgy corner and every set of verbal instructions reassuring us to just carry on.

Eventually, we pulled into a tiny town, called ‘Gonzales Bastias’, which had the requisite number of Chilean stray dogs, and one dusty restaurant that didn’t appear to offer more than a couple of handmade empanadas. Again, applying my pidgin Spanish, we asked the restaurant owner ‘Donde Vina Gonzales Bastias’ – he could tell I can’t really speak Spanish, so he just gestured for us to follow him. We left the car, windows down, unlocked (not realizing we were embarking on another journey) and walked with him down to the river bank. He pulled over a rickety old row boat, two dogs jumped in the boat, and he motioned for us to follow suit. 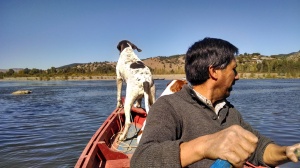 We did. And he proceeded to row us across the river, and help us clamber on to the stony spit. The dogs jumped out too, and immediately tore off into the scrubby forest, presumably after rabbits. Our ferryman gestured for us to look up a small hill, where there were indeed some buildings. Off we plodded.

Coming up the hill, and dodging a few horses, geese and chickens along the way, we were approached by a swarthy young Chilean man in a plaid shirt. Applying broken Spanish again, I said that we were looking for the winery. Responding in fluent Spanish (and zero English) he reassured us that we had found the winery, and that he was the owner. Success! Fortunately, his girlfriend is a fluent English speaker, so we were able to get the story in better detail.

Vina Gonzales Bastias was founded over 200 years ago, and can be traced back through the family. It has five hectares of property, growing Pais and Pink Moscadel grapes, and they produce 5000 bottles of wine a year. Every year sells out. Their focus is to be as original and true to ‘old school’ wine production as possible. They use absolutely no pesticides or irrigation, relying solely on nature to grow their grapes, coupled with their stewardship. Everything is picked by hand, crushed by hand, using handmade crude tools. They have one large clay amphora, over 100 years old, and made from local clay from the hills, and they also have some old French oak barrels (those appear to be hand-me-downs from other wineries) – but used so often, that hardly any oak influence is found in their wines. No filtration, no fining agents, no sulphites. This is simply grapes, picked, crushed, thrown into a barrel/clay pot, left to rot, poured into bottles, left to sit awhile longer, drink. Wash, rinse, repeat.

It was a lovely day, not a cloud in the sky, and the location is simply stunning. The little winery seating area was handmade by Mr. Bastias. He had a young French chap working as an intern, who planned to return to his winery in France to apply what he had learned. We were served a simple yet hearty lunch, prepared by Ms. Bastias, with support from the local village – everything locally produced, ‘organic’ as organic can be, and I’m not sure they’ve even heard of the term ‘GMO’ out here. For the record – I’m not an organic/anti-GMO wing-nut by any stretch of the imagination. But for people who want to see what it truly means to live off the land, and produce local food, this is the trip for you. Indeed, the proprietors are doing what they can to purposely remain off the beaten track – they don’t want Whole Foods coming in and commercializing their charming and precious operation, sticking labels on the wines that say ‘Your bottle of wine is named ‘Pasquale’’ etc…

For dessert, we were offered tiny nips of a local fig liquor, which they were also producing locally. Here, 70 kg of figs from one ancient and enormous fig free in the field, turned into 4 liters of the sweetest, most figgy tasting dessert drink I’ve ever had. I was able to convince them to sell me a small bottle for my bar at home – they allege I am the first person to buy any, since it is such a limited production.

Does it work? How are the wines at Vina Gonzales Bastias? They are unlike anything you would be served commercially. Intense floral aromas that I haven’t smelled on other wines. Beautiful in the glass, but in an atypical way – deep rich plummy purple in colour, and surprisingly clear, with just a trace of sediment/murkiness. The flavours are challenging – typical fruity and jammy tastes, but with an almost sexual funkiness entwined. Presumably Wine Spectator wouldn’t score them highly, but from an experience perspective, the wines definitely DID work. And at about $14 a bottle, we bought a dozen, so that we can offer future visitors a sampling without the headache of getting to the winery.

If your preferred travelling adventure involves a bit of the unknown, a bit ‘off the beaten path’, a bit ‘the road less travelled’ and sampling something rare and precious at the end of the trip, then you definitely want to add Vina Artesenal Gonzales Bastias to your bucket list!

Like Loading...
‹ What the Heck is THAT? My daily brain game…
Friday Fun Flick! Moms always try to help! ›