John Singer Sargent was probably the best known portrait painter of his time. He was talented enough to make a living painting the famous and the rich. He painted a American President and English Royalty. While his most famous painting is that of a seemingly mysterious beautiful woman, the Madame X, my favorite painting of his features another beautiful but very young woman. 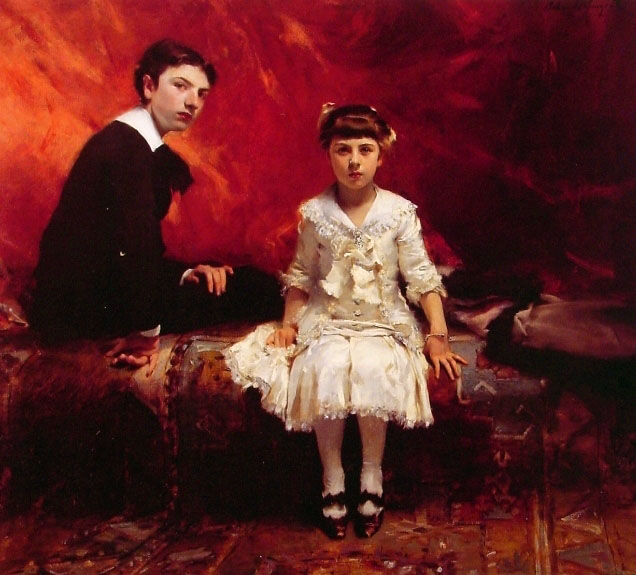 Marie-Loise Pailleron’s parents had been painted by Sargent. They probably decided it would be nice to have a portrait of the children done also. The children, from a well-to-do French family, were duly sent off to Sargent’s studio to pose. They posed. They posed some more. They posed over and over again in sessions where they were told to “hold still.” Marie-Loise Pailleron, spoiled young daughter, did not like posing and sitting still. It went beyond “not liking” into hating Sargent. In ways only very young girls know, she began to make his life during the painting sessions a living hell. She would not hold still, she did not want to cooperate. She had many other things she would much rather be doing. No, she would not smile. She was also very angry at her brother Edouard, as he was doing exactly what Sargent asked. Once again, he was the cooperative good older brother. She had only contempt that he would be so cooperative. Sargent, instead of painting a sweet little child, and many of his paintings are of sweet little girls, painted the truth. The “I do not want to be here” look she is giving him, is what makes this painting rise above yet another little girl in a fluffy dress candy box work. Edouard also reflects how older brothers, with very spoiled little sisters, must feel. He’s had it with her, but what can he do?

I try to imagine what Marie-Loise’s parents thought of the finished portrait. Later in life when interviewed about the portrait she felt no remorse for her behavior. She admitted to tormenting Sargent, and also to being a very spoiled daughter. She still remembered, even as an old woman, how much she had hated having her portrait done. She also seemed rather proud she had stood up to him, and was not sorry at all she had not smiled. Strong minded little girls grow up to be strong minded women!

When the portrait was done, however, a truce occurred. Sargent and Marie-Loise joined together in throwing things about the studio, and even out the window, in a celebration that at last they were done with the painting and each other! Sargent’s works are beautiful, but the hatred of Marie-Loise Pailleron has to be one of the best things he ever painted. I appreciate the strength and will of a young girl who lived a long and eventful life, over the passive beauty and vapid cuteness of other paintings of little girls. I can say, as mother of two daughter, the reality is little girls are tough.