Author at the WSOP

I’m a bit of a collector / dealer in esoteric items. One of the things I collect is poker chips. I’m an avid poker player, having had some success at tournament and cash game play – so it is a logical hobby choice. I tend to collect chips from casinos where I’ve gambled, especially from ‘weird’ places – like North Korea, Afghanistan and Burma. I also have a particular interest in ‘Old’ Vegas and ‘Old’ Nevada gaming in general. Specifically, I am passionate about the Granddaddy of all poker tournaments, the World Series of Poker. 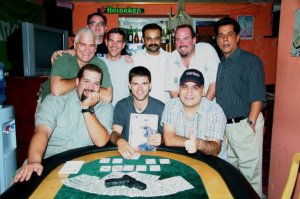 Kabul (Afghanistan) Gaming Board. I played with this group

The World Series of Poker was the brainchild of Benny Binion, who owned ‘Binion’s Horseshoe’ Casino in what is now called Downtown Las Vegas.  It had relatively humble beginnings, until poker exploded in the mid-2000s, and the WSOP got bought out by Harrah’s Corp. Benny and his son Jack were visionaries in the gaming and poker industry – they had the foresight to get poker coverage online in the late 90’s, and televised the WSOP from the 70’s. Indeed, ‘Amarillo Slim’ became arguably the first poker ‘celebrity’ after winning the WSOP at Binion’s, with subsequent appearances on Johnny Carson. I’ve been playing poker seriously since the mid 80’s, and I’ve always considered playing cash games, tournaments, or the WSOP itself at Binion’s Horseshoe to be the equivalent of competing at the US Open – it is where the best compete with each other, along with the pro-ams, with the wannabes and the positively no-hopers.

Prizes in our poker tournaments, Kabul

Anyways, this story is about a very specific poker chip, which I recently won at an auction. It is the most valuable chip in my collection to date, and one that I assumed I simply would never own. The story behind this little piece of clay is harrowing and mysterious, but I’ll spin you a bit of a yarn about the elusive ‘Binion’s Horseshoe 10th issue $5000 Chip known colloquially as the “Chocolate Chip”.

The chip I just bought completes my set of the 10th issue, which was in use in the late 80’s through the 90’s. Hardly the oldest set of chips in my collection. But the $5000 chip has a specific history, and is considered a rarity or at least a major scarcity among chip collectors. Firstly, a $5000 chip in Downtown Las Vegas during the 80’s/90’s was basically unheard of.  Most of the high-rolling action was shifting during this period to the ‘Strip’.  But Binion’s had always prided itself on being a high-roller’s casino. Tales of multi-million dollar bets at Binion’s are commonplace. So Binion’s Horseshoe was the only ‘Downtown’ casino at this time, to have such high-denomination chips in circulation. In fact, if you go today and walk around dingy old Downtown Vegas, most of the casinos have no chips larger than $100 on their tables. Only the Golden Nugget carries high-value chips on some of their tables any more. The El Cortez brings out $500 chips when needed, but only if someone is going on a tear at the Craps table.

In any event, Binion’s Horseshoe was itself in trouble, and there was a hostile takeover by Jack Binion’s sister Becky. Ted himself, ended up dead of a heroin overdose soon thereafter, a tragic tale well documented in James McManus’ book ‘Positively Fifth Street’. Here is where the story of the $5000 chips gets a bit kooky.  In Vegas, casino chips are actually ‘Cheques’ (and that is what they are called in the industry).  Technically, casinos are supposed to have enough physical cash on hand to cover all the cheques out on the floor.  (This is one of the premises in the Oceans movie series).  Anyways, when the club was going to be handed over, the story goes that Jack Binion ordered 25,000 ‘Chocolate Chips’ – some $125,000,000 in value – unheard of at the time, and way more than what was needed at the casino.  It is alleged that Jack removed these chips personally from the casino cage – a story I find to be implausible – just a few thousand of these clay chips are VERY heavy, far more than what a single person could carry.  25,000 would require a strong trolley to cart them all around.  It is unclear where these chips are now.  But at the time, Becky thought that this was a plot by Jack to attempt to break the bank. Their version of the story is that Jack was planning to show up at a vulnerable point and attempt to cash in these chips, thereby bankrupting the casino and allowing him to buy it back for a song.

Part of my chip collection

In any event, Bob Stupak, a high stakes poker player, and owner of ‘Bob Stupak’s Vegas World Casino’ (Now the ‘Stratosphere’ in North Las Vegas) attempted to cash $250,000 worth of these Chocolate Chips.  The story goes, that Becky refused to honor the chips! For a casino to not cash a cheque is a HUGE deal, and as you can imagine, a lawsuit ensued. Other high profile people got involved – Hamid Dastmalchi, World Series of Poker Champion in 1992 was denied cashing in some $800k worth of Chocolate Chips.

Stupak, with a history of crazy stunts and being an all-around flamboyant and creative character, came up with an idea to blow the door wide open and force Binion’s to honour their Chocolate Chips.  He donated a single Chocolate Chip to a charity, and then offered to help the charity attempt to collect on the cheque. Media shenanigans followed: news cameras came to the casino to see if the cheque would be cashed. In the end, the Binions were forced to redeem all their Chocolate Chips, but the alleged conspiracy for Jack to break the bank of his own club never came to fruition.  Becky ran the casino into the ground – even selling the $1,000,000 in cash display (100 Uncirculated obsolete US $10,000 notes) before it changed hands a few times in the mid-2000’s.  The casino still operates today, minus its former high-rolling glory, as ‘Binion’s Gambling Hall’ – but has no Binion ownership. The poker room STILL attracts a number of fierce locals, and wary tourists attempting to test their skills – but the high stakes action has moved on.

The story of the Chocolate Chips gets even more colourful, when it is noted that one famous gambler named Archie Karas, ended up winning ALL the ‘Chocolate Chips’ in the Binion’s cashier cage – an estimated $18 million in value.  Archie recently was busted for cheating (marking the cards) and is facing a big court battle and possible jail time.  It is not believed that he cheated the Binions out of this huge win (indeed, he lost it all back over time) but just think – my little $5000 chip was once in this guy’s hands. 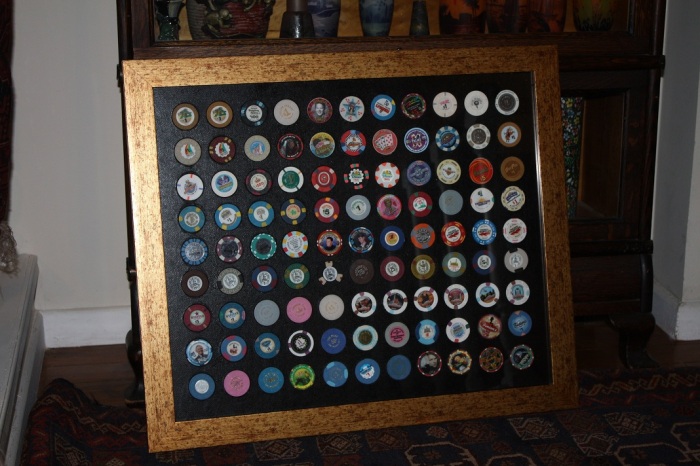 More of my casino ship collection

When Ted Binion’s secret vault was opened, it revealed a massive hoard of mint-condition US Silver Dollars. Many of these retain their provenance as ‘Binion’s Hoard’ when they are certified by professional coin graders. Was my Chocolate Chip in his vault?  Was it in his house when he had that last heroin hit?  If so, how did it find its way to Ebay, and to my collection?

It is hard to predict the number of ‘Chocolate Chips’ that remain on the market.  Mine is barely circulated in condition – which is to be expected on a high denomination chip.  They come up for auction very rarely – the last one I could find when I researched how much I should expect to pay for this one,  sold on Ebay in 2008.  I couldn’t find any specimens for sale at any of the poker chip dealers, or among the collectors forums.  I would say there are likely no more than a few dozen out there, perhaps even less, based on how fierce the bidding was for mine.  I suspect my Chocolate Chip will retain its value, perhaps increase as the collector interest in chips continues to grow.  However, should Jack Binion ever dig up a cache of Chocolate Chips he has buried in the desert, then I guess my little investment at auction will take a significant hit.

Like Loading...
‹ Failure is not an Option: Friday Fun Flick
Parisian Doors, or what to do when you are broke and in Paris ›