The stamp with the Emerson quote was $10 (not something I’d use very often!) and the card cost about $50 to make.

I live in a nice rural neighborhood. When my daughters were younger, they would go to “play group”, a get together of various moms and youngsters from the area. Later my daughters would babysit the younger children. While I wasn’t close friends with all the neighbors, I did feel rather welcome.

As the children grew and went to college, most of the moms who didn’t work found they had a lot of time on their hands. One mom decided to take up scrapbooking.

Scrapbooking is a hobby that also covers “card making”. My neighbor is mainly a card maker. If you stop in any hobby shop, you will find aisles devoted to beautiful papers, stickers, stamps and even specialty glues devoted to this hobby. It’s way more than just “cut and paste” and the creations are truly detailed and beautiful.

The problem was the mom who decided to take up scrapbooking found it can be an expensive hobby. So she decided to sell stamps. The stamps used to create cards and scrapbooks are not inexpensive. The company she works for sells stamps via home parties, much like Tupperware.

Our neighbors used to get together for cookie exchanges and coffee chats. We had a book club at one time. That was before scrapbooking fever took over.

The point of the stamping company was not just to have someone sell stamps, it was to recruit other women to sell stamps.  Soon, in our little village, we had four women selling stamps. Any get together was now a “stamping party”.

I am an artist, so it was assumed I would take to scrapbooking and stamping like a fish to water. I, however, did not understand the rules. My failure at stamping and scrapbooking has lead to a sort of exile in the neighborhood.

I really tried. A stamping party seems to work like this. The hostess has cut up and set out work stations. Everyone makes several cards, the exact same cards. They are gorgeous cards. You send them to people and it’s like receiving a gift.  You put a lot of time and work into each card. Someone has designed the card. Your job is just to follow the steps.

I made a mistake of  not following the steps. I decided to put an origami dove on the cover of the blue holiday cards we were making, instead of an angel we stamped, glittered and puffed out with some heating device. I was informed  I needed to stick to the pattern.  The point, it seemed, was after you were done with your card, you could buy the angel stamp to make more cards at home.

While I would love to play with papers, stamps, glue and glitter, I also knew I could not afford to take up this hobby. Most of the women in the neighborhood have entire rooms devoted to this hobby. One woman even had an addition put on her house, and has a wonderful hobby room with sky lights and buil- in drawers and a giant crafting table down the middle.  My opinion is anything that brings happiness and relaxation, to say nothing of a sense of accomplishment, is a good thing.

I just can’t afford  a hobby that requires so much stuff.  I also like to spend my free time knitting, which I like as people enjoy getting a hat or scarf for a gift.  I also like knitting hats for charity, I like being able to give back by knitting hats for kids in need.  There is also my regular art work, which takes up a lot of space and money in expenses, but I am sure of selling and making more money then I have spent. 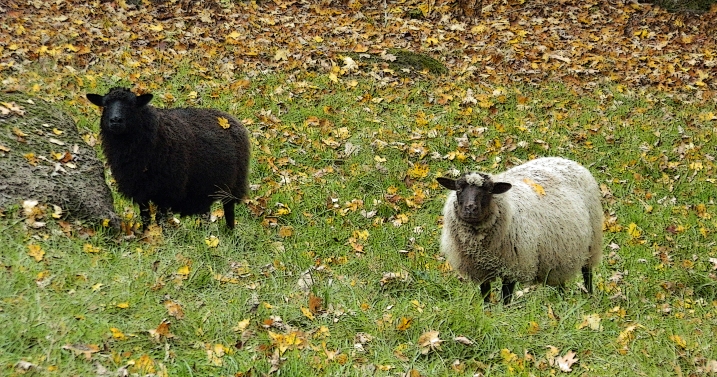 Made in America wool, I have knit hats from these sheep!

At first I would attend the parties, try to follow the steps, and then buy whatever was cheapest in the catalog of stamps to buy. It would then be given as a gift to a scrapbooking relative for the holidays. It was really the only way to get together with the neighbors.  I would be assured I didn’t have to buy anything, but anyone that has been to these parties knows you feel horrible if you don’t.

I began to have pressure from the four women selling to have  party at my house. I pointed out I had no crafting room, only a studio space which I truly did not want to have people gluing and tromping around in.  I had projects of my own, that  make me income.  My studio is where I make stuff to pay for  my car payment and insurance, and it  helped pay for the children to attend school.  It wasn’t a hobby space, it was a work space.

There was also the pressure to not only invite the same women that attended all the parties over, but to feed them. So I was throwing a party with drink (wine of course, simply soft drinks was not correct) and home made cookies, dip and finger food.  Then I had to pressure everyone to buy stamps. I would get a hostess gift.  The gift would be some sort of stamp.

I soon learned to avoid the parties. I did not wish to throw an expensive party so one of my four neighbors would stop nagging me to do so (and if I threw a party for one to make money, I would have to throw for the others).

My husband and I prefer to have people over. We are glad to have wine, beer and soda as choices for drinks. I am glad to make some snacks.  Often we make dinner.  We aren’t too cheap to have people over, but I draw the line at selling something to my guests.  I am not comfortable with it.

Today, the scrapbooking mania continues.  I get invited via email or flyers, and turn the invites down with a sense of relief.  I see large numbers of cars parked in front of a home and I know what is happening. Women are having fun cutting and stamping and making beautiful cards.  I wish I could belong, but it’s just not my thing.  I just wish we still had the cookie exchanges and coffee chat visits where no one was selling anything.

Also, these are women only, and the times my husband and I  do entertain, the husbands often comment about how nice it is to get out.  The quiet non-selling parties are a thing of the past as my one neighbor said “If I am going to supply food and drink, it has to be for a stamping party.  I have to have those, I can’t waste money on just a regular party.”

We’ll see how long this lasts.  I don’t buy stamps, but I am more than glad to have access to the beautiful papers that the local crafting store carries.  I use it in some of my paying artwork.  I’m also glad that the people in our community can afford a hobby that is quite expensive, but the endless rounds of selling parties has seen the last of me.  I’ve been exiled for not scrapbooking, but it is by my own choice.

Meanwhile, a nice group of women in the next town over  knits, and they don’t sell anything. Instead they help each other with hard stitches and encourage each other.  I have to drive out of our neighborhood to meet up with them, but it’s been the social experience I’ve missed.  We even give each other leftover wool for projects.  Maybe one day knitting will come to be the new hobby of the little area where I live, but until then I’ll be avoiding scrapbooking/stamping parties.