My neighbor on Lake Franklin Pierce in Antrim NH likes to put on a backyard fireworks show for the entire lake.  We aren’t talking sparklers.  This is New Hampshire where terrorists are known to shop for bomb parts, and you can buy just about anything.  Many large fireworks manufacturers are located in the state.

The fireworks start at 9pm, when it is still a little light. In this early photograph you can see the lights of some of the boats that have come to enjoy the show.

It really DID set off car alarms!

My neighbor, Steve, accepts donations toward the costs, but he pays for most of it himself.  This year Steve had to put on the show a week early as he will be gone over the 4th.

Word goes out, everyone tells someone else “Tonight fireworks!”

This year’s show attracted over 20 boats. The boats “BEEEP” their approval after each series of aerial explosions.  People cheer on the lake shore and from the boats.  The show usually runs well over an hour.  There is always a chance of fire, the woods, the sailboat and sometimes even the boat house have had close calls. 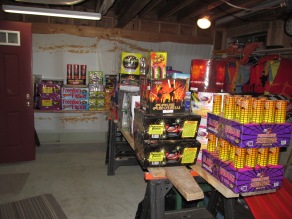 The fireworks ready to GO and BLOW!

Everyone is welcome, either at Steve’s house, or just come on your boat.  It’s something my family enjoys every year.  Also, no crowds leaving!

It’s not a New Hampshire summer without Steve and his fireworks. 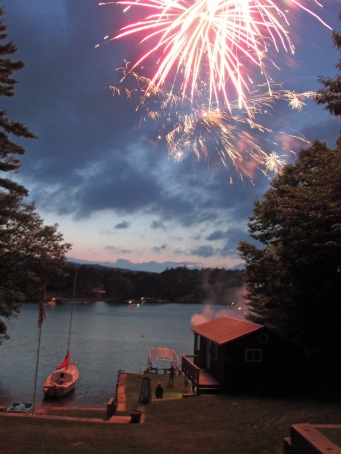 Just a few fireworks in the downstairs. Yes one year someone walked in while smoking a cigarette. Yes I ran. I’m pretty darn fast when motivated.

it had rained the day before so nothing caught on fire. We were, rather sad.

Like Loading...
‹ Invasion of the Giant Zombie Flesh-eating Cicada. Or Something Similar
Friday Fun Flick! What I Do for a Living ›