Fiction, Non-Fiction, and Just Plain Weird: Information at the Library

Fiction, Non-Fiction, and Just Plain Weird: Information at the Library.[i]

In 2003, former Attorney General of the United States, Ed Meese, echoing a sentiment expressed by John Ashcroft, stated on the Today show that “librarians, unfortunately some of them at least, are more interested in allowing pornography to go to children than they are in fighting terrorism.”[ii] A couple of years later, an unidentified FBI official commented in an email, “While radical militant librarians kick us around, true terrorists benefit from the Office of Intelligence Policy and Review‘s failure to let us use the tools given to us.” [iii]

Librarians are important to freedom of information.

You’ll notice that I have cited my sources for these two quotes and have corrected an error. Accurate information and the willingness to correct oneself is a corner stone of critical thinking and the fight against nonsense, or as many call it, woo.

Occasionally those fights become literal, as happened to a colleague in the not-too-distant past. While waiting at a light rail stop, she noticed a man removing the library labels from a book. Pausing only to whip out her camera and take pictures, she snatched the book from his evil grasp, and when he followed her onto the train, asked in a loud voice, while standing near a large and sympathetic man, “Why are you stealing from all these people?” Do. Not. Mess. With. A. Librarian.

I found my own skepticism at the library, after becoming frustrated with requests for horoscope predictions and books about the “Bermuda Triangle.” I befriended James Randi, Martin Gardner, and Carl Sagan at the library and now introduce these fine writers and others to our customers. 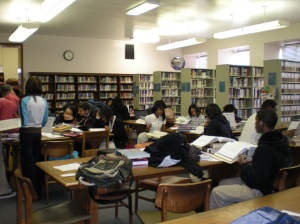 Librarians know the sources of their information, they can give the choice between good information and bad when appropriate, know the publishers, and can be a guide to those questioning the status quo.

A couple of years ago, someone on the James Randi Educational Foundation Forums proudly announced he had moved the bibles in his local library from the non-fiction to the fiction section. After I calmed down, I pointed out to him that someone had worked hard to shelve the books properly and now would have to do that work all over again.

But why would we shelve what we know is not true with the non-fiction books?

We are not making a judgment about the veracity of a book; we are following the taxonomy. Librarians classify information according to how we theorize people will look for it. We agree that the bible might not be literally true, but it does contain poetry, folk-lore, and religious information, all of which fall into the non-fiction classification.

Bear in mind that information classification systems are rather like languages. I have worked all my professional life with the Library of Congress Classification System. Take for example the call number: ML128.S3L6651998, The Song Index of the Enoch Pratt Free Library. Looks like a string of unrelated numbers and letters, put together by a stern old lady in order to confuse the public. Now, let’s take a closer look.

L665=Cutter number for the author

That, my friends, is taxonomy.

It is worth noting that classifying can be more of an art than a science in some cases. For example, The Official Preppy Handbook, a parody of the preppy fad of the 1980s, was classified with the preparatory school information.

In a letter to James Madison, Thomas Jefferson stated, “Educate and inform the whole mass of the people… They are the only sure reliance for the preservation of our liberty.” This is exactly what libraries do. However, the question arises, “Where is the good information?” It is important to know your sources, and remember that sources on the Internet can be hard to backtrack. I am teased a bit that I am not a great fan of Wikipedia™. When I do consult it, I back track the external links to see what the source of information is. Think about it. Do you want your September 11 information coming from Dylan Avery?

So, the weapons against woo:

And if the facts lead you where you don’t want to go, follow anyway–it might be more fun!