Duck and Cover for GI Brats 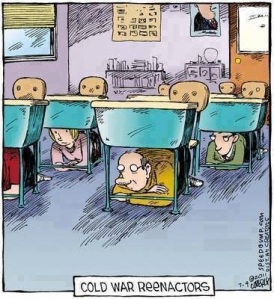 I never did this

When I was in my 30s, I got into a conversation with a woman, roughly my age, who brought up how terrified she had been throughout grade school, practicing “duck and cover”. I had never heard of this, so she explained how her school had not only random fire drills, they had random “OMG an atomic bomb just dropped”.

At this time, I was grown and had earned an engineering degree, so I was a bit skeptical that schools actually took time to do this silly thing. As it turns out, it was a rather widespread practice in the U.S., in the 1950s and 60s. So why had I never heard of this, much less experienced the drill?

Where was I in the 1960s, during the Cold War? To give you a hint, my father was a tail gunner on B-52 Stratofortress. Have you seen the Stanley Kubrick movie Dr. Srangelove? The kind of plane that Slim Pickens was piloting, and riding a bomb down to glory. I lived on a SAC base in eastern Montana, two hours drive from the Canadian border. Glasgow Air Force Base was one of a string of bases strung along northern U.S. (including another place I lived, Minot AFB in North Dakota) that were part of the first defense against potential Soviet bombers flying over the Arctic Circle on their way to destroying Our American Way of Life. If I correctly recall my dad’s stories, Glasgow was situated such that a plane and crew had 17 minutes from the time a hostile plane was pinged by US or Canadian radar until it was within bombing range. In order to get the huge slow planes off the ground within 17 minutes, some crews were always ‘on alert’, meaning dressed and ready in barracks beside the runways. In the extreme winter days, the planes were kept running, ready to fly.

So what did that mean for the dependents going about their lives in the housing area? Assuming that the military outposts would be among the first targets of the Soviet bombers, and the schools and homes were only a couple of miles away, what would be the purpose of teaching children that they could be safe hiding under their desks? I don’t recall that the possibility of attack was ever mentioned, at least to the grade school children. We were going to be carbonized, black shadows left against the backdrop of melted concrete walls.

I did not learn ‘duck and cover’ with the rest of American children Good, bad, or indifferent, I was also never terrorized about the possibility of dying from a nuclear bomb blast.