I shared some of my adventures as a Navy wife during the Cold War recently on the blog.

One thing about being the wife of a submarine officer is that you were out of contact with your husband for months.  No phone calls, no letters, and certainly no emails as there was no internet.

The problem was a lot of things can happen in 3 months.  Most marriages, if something happens, you deal with it and move on.  This never had a chance to happen with the submarine marriages.  Your husband came home and found out everything at once.  There was always an adjustment period.  My own husband I remember became upset when I simply took out the garbage.  It had always been his job, a job I had to nag him about, but when he saw me simply do it on his own for some reason it made him feel not needed.  I went back to nagging, and he was happy again.

Our eldest daughter was born when my husband was out to sea.  The joke was, your husband could be there for the conception or the delivery, but not both.  The timing of the submarine meant most mothers were delivering babies with a friend or family member, not a husband.  My best friend Mary was my delivery partner. 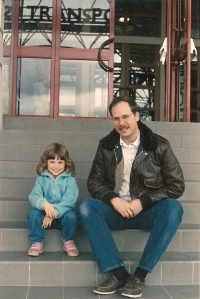 Our daughter was 10 months old when her father left for sea, and for three months I would show her a VCR tape of her father reading books.  There was a framed photograph of my husband in his uniform on the wall, and I would always say “That’s your daddy!”.  My daughter then began calling every Navy officer “Daddy”.  To her, a man in an officer’s cap was a “Daddy”.  It was, confusing but then again, a lot of people got a laugh out of it.

When her father came home, I was so excited to show off how our daughter had learned to walk and knew so many more words.  We drove to where the bus that had picked up the men from the airport would be.  My husband’s boat was stationed in Scotland, so the crews flew back and forth.  A bus would pick them up from the airport and drop them off at the Navy base. 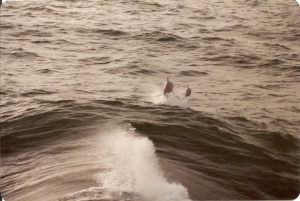 My husband came off the bus, and our daughter was “Who the hell is this?” (well she sure thought it).  As we drove home, she was totally silent.  I did get to show off how she could walk and knew many new words, but the next day proved interesting. I kept saying “It’s daddy!” and our daughter toddled over to the photograph on the wall, pointed at it and said “DADDY!” I knew there was going to be some bonding that needed to be done.  It should have been done slowly and care, but let’s face it I needed a break.  I had that child for 3 months. As much as I wanted to spend time with my husband, I wanted to spend time without my child.  I was going shopping and then to  the library.  I handed the child to husband, waved goodbye, and said “Get to know each other!”  I drove off to the screams of my daughter, and a look of desperation on my husband’s face.  I would have felt guilty, but I really needed a break.  I came back to the two of them playing with blocks and Cheerios all over the place.  They had discovered they liked each other.

Waiting for the bus…

The worst homecoming ever I was only a small part of.  The crew was due in within a few days.  The wives had made banners and were very excited.  I was happy not to be taking out the garbage soon.

yes there were a lot of sex jokes…

Then the call went out.  Every officer’s wife was going to be required to stay with Jean, one of the other wives.  We were not allowed to go run over to see our husbands until we made sure Jean’s husband did not kill her.  Yes, “kill her” were the words used.  It was our job to support her, until she had told her story of just what had happened the 3 months her husband had been gone.

So just what had happened?

Well, Jean had to explain how she had bought 2 new cars, and why the garage was now missing.

Remember, most couples, bad things happen one by one.  Jean had to explain three bad things all at once.  The funny part is that all of this happened in just one week.  Jean had been in a car accident, her fault, and the car was totaled.  That was going to be hard enough to explain, but things happen.  She then bought a new car, and parked it in the garage.

She has also bought a really nice new wood stove.  She knew her husband would be happy as they owned their own home, and the cost of heating fuel had gone up.  The wood stove was going to save them a lot of money.  Jean decided to test out the new wood stove, and after one use decided to clean it out.  She used the vacuum cleaner, took out the bag with the ashes, and put it in the garage.

She looked out her window later at her not attached garage (thank goodness) to see it was a mass of flames.  The garage, and the new car, were gone.

Jean went out and bought another car.

We all stood by Jean, while our husbands wondered what in the world we’d all been up to while they were gone as we all looked horribly guilty of something.  Jean’s husband forgave her, after all they had been accidents.  We were all then able to go home and readjust again to having a partner around.  Jean sort of set the standard though.  If something went wrong while my husband was gone I was always able to think “Well it’s not like I burned down the garage!”