I’m clearing out the basement and come across a giant portfolio FULL OF PORNOGRAPHY! Well, actually it’s just some of my class exercises from my first real art class in college. 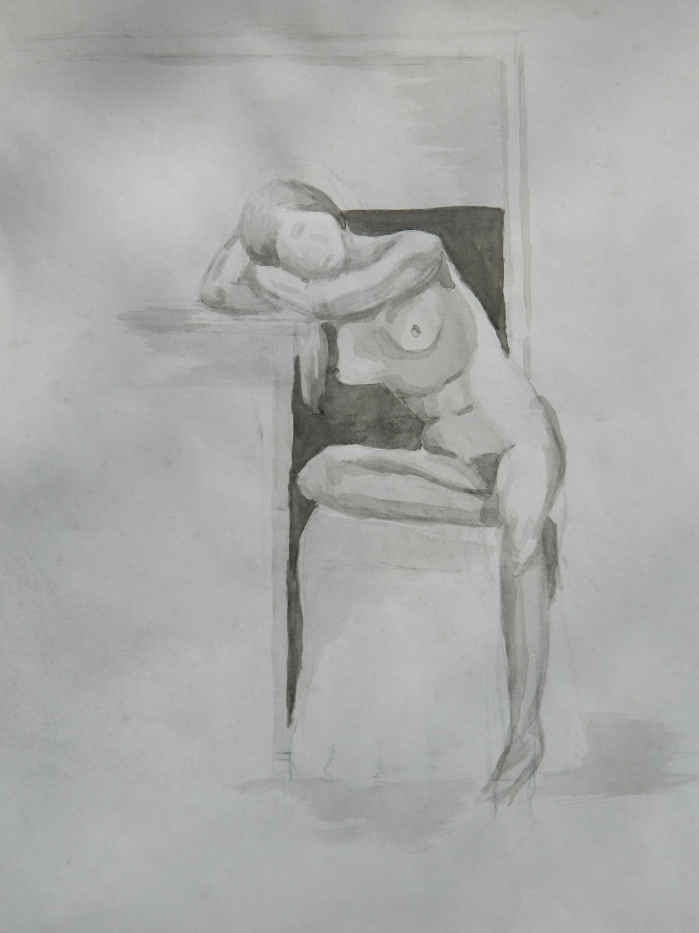 when you have to draw quickly, proportions get weird

The first day of my first drawing class, I took a seat in the circle of long benches around the slightly raised podium with a chair. The door opened, but instead of the professor walking in, a young woman with only a bathrobe entered. She stepped on the podium, calmly took off her robe, and sat in the chair. A look of infinite boredom (I would soon draw that look over and over) settled on her features. The professor walked in and noticed all the freshmen staring at the model. He made it clear the sooner we got over nudity, the sooner we could become real artists. 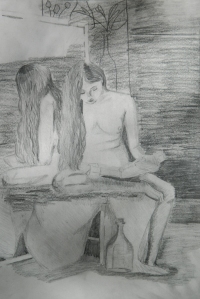 Over the next months I went through reams of paper. The paper was often the cheapest butcher block. Our professor wanted us to learn to draw, not just “create a drawing.” Timed drawings.  “You have 10 minutes ladies and gentlemen!” was one of the professor’s favorite teaching tools. The results were anatomically challenged drawings, and what we felt was less than our best work. He pointed out we had been doing “drawings” not “ drawing to train your hand and eye.” He pushed us out of our comfort zone again and again. Each student thought he was a a good artist, but this was artist boot camp. We had to know how bad we were before we could learn to truly be good.

I once complained to the professor that I was an abstract artist. I did not see the need to draw nude after nude. The professor told me about Pablo Picasso. Picasso was once challenged by other artists to draw a portrait of one of them, while on a bouncing train trip. He had very limited time and his fellow artist were joking he couldn’t do it. The result was a remarkable likeness of his fellow artist, that still survives. It is probably worth at least a million dollars. In other words, an artist needs basic skills before he can start turning his back on those basics. “You have to know the rules before you can break them!” the professor was fond of saying.

The professor would also point out that there is bone and muscle under all that clothing and skin. When someone complained they rarely drew humans he came back with “What! You don’t think buildings and plants and the Earth itself does not also have interior layers? Everything has muscle and a skeleton of some sort! You have to reflect the inside when you draw the outside!”

I can tell my early drawings of men, as they are all from a side or back view. I was green. One day the professor noticed my shyness. He placed me right in front of the model and said “I want you to draw a penis! In fact, from now on, every drawing of a male model will have a penis or I will fail you!” I developed a comfort with nudity in that first class that has stayed with me through life.

When the class would run short on that week’s

model budget, the professor would invite one of the students to model. I have to admit in this first class no one volunteered to model nude. So I know the drawings with clothes on were student models. When the times were really tough, the professor would pull out his skeleton. I enjoyed drawing the skeleton most of all. It held still, and in the early days when it still mattered, the skeleton didn’t have a penis.

I threw out most of the drawings. Butcher paper doesn’t hold up well with time. Most are really horrific. They weren’t meant to be finished products. I’m holding onto a few of these early lessons in how to coordinate eye and hand. The drawings are a reminder when I went from someone that could draw fairly well, to an artist.

The best lesson I still carry with me, from that class, is how I look at the world. I look at a baby and see the soft folds of the fat and muscles, and the small bones holding the large skull. I look at the mountains where I live and see the muscles of dirt, and skeletons of rock and tree roots sculpted on the surface undulations. I look at the lake in front of my cabin and see the muscle of the current , and the skeleton of the rocks and shape of the lake bed. Art class taught me how to see. The world is so much more than just what is on the surface. We all have an interior that is reflected on our exterior. I like seeing the world, and people, that way.

Like Loading...
‹ Taquerias – Fine Dining in the Oil Field
She’s so picky she’s probably waiting for a man with a “Warp Drive” zipper… ›