Home › Travel › The Hmong Among Us, A Refugee Story

The Hmong Among Us, A Refugee Story

Our younger daughter was born in Two Rivers Wisconsin….and we lived in Manitowoc. A wonderful area to raise a family.

Much like a marriage,things nearly as smooth and seamless as people hoped.  However, with much perseverance and hard work on the parts of both the refugees and the locals, things worked as well as anything involving vastly different cultures and heritage can work out.

Simple things like figuring out birthdays for the children.  This involved dentists, because no one was sure just when a child was born.  Birthdays just weren’t a thing in their culture and in the US birthdays are everything.  Every paper you fill out requires a birth date.

Bathrooms were an issue, at the schools somechildren would go outside to use the bushes rather than the indoor toilets.  Doorknobs were even tricky.  Snow and cold and prejudice and infighting among the groups themselves were a problem.  Doctors were a huge problem.

My own personal doctor had a waiting room full of Hmong.  He was one of the few physicians in the area that agreed to not perform an autopsy.  This was vey important to the Hmong as it went against all their traditions and beliefs.  If an autopsy was performed, the ghost of the dead person would come back to claim another life.  I am sure it is far more detailed than my simple explanation, but my doctor would rather not schedule an autopsy than have the families stay away from Western style physicians. 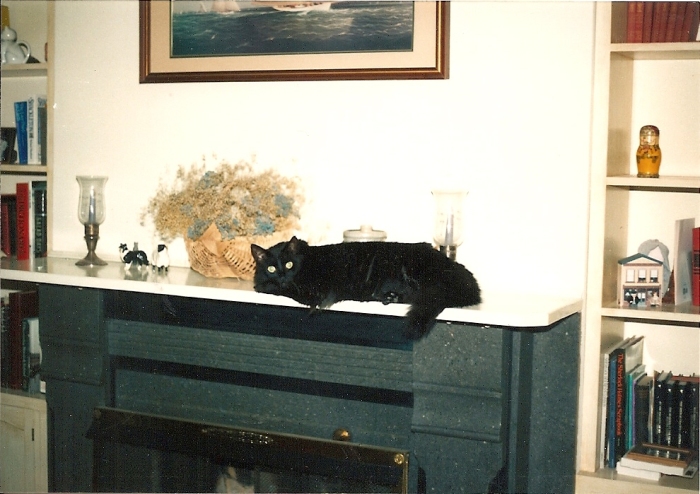 Manitowoc is a small town full of beautiful older homes, we adores our Victorian home with marble fireplace…and cat Othello.

There were other issues, not so apparent in very conservative Manitowoc Wisconsin.  There were issues with gay people, with women going to school, with religion and abuse by non Hmong of the less socially savvy Hmong.  I moved away over 20 years ago, so I don’t know how things have eventually turned out. 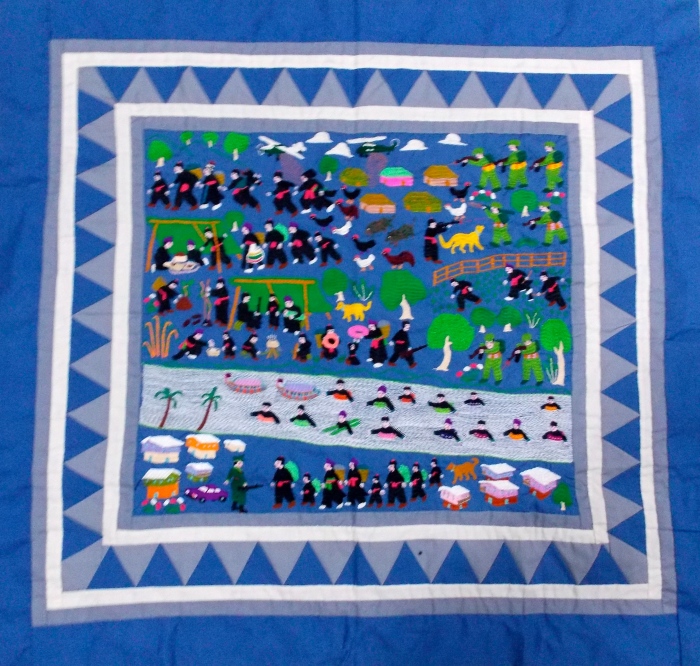 I had a friend that worked closely with the Hmong, and she would sell the lovely needlework for which the Hmong are still well known.  While I loved the traditional maze like patterns, I also enjoyed the picture needlework.  This was not traditional.  Instead the Hmong had copied pictures from school books and coloring books, creating an entirely new form of cultural expression.

I bought many needlework pillows and wall hangings from my friend, but what I treasure most are these picture wall hangings.

My favorite shows the story of how they came to the internment camps. 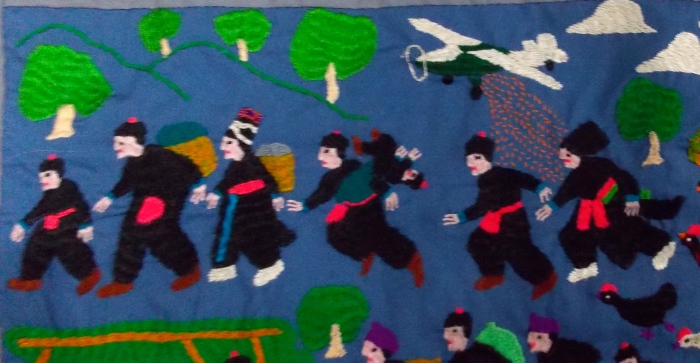 Planes shooting the Hmong, my children always felt so sad about the “baby that fell”.

The Hmong had a dangerous journey to safety.  Here they are putting on children’s type floats to make a dangerous water crossing.  Not all made it. 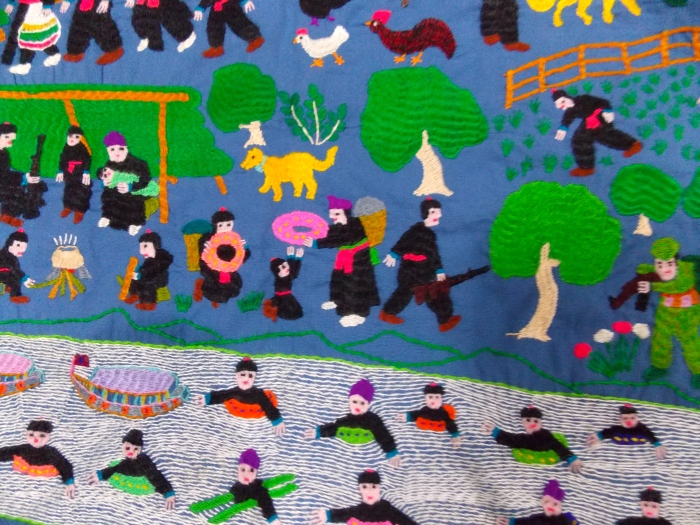 Cheap children swim rings were used. You can see one adult blowing the orange one up. Also you can see the lean to type housing with the family hiding.

The Hmong were attacked even as they tried to cross to safety. 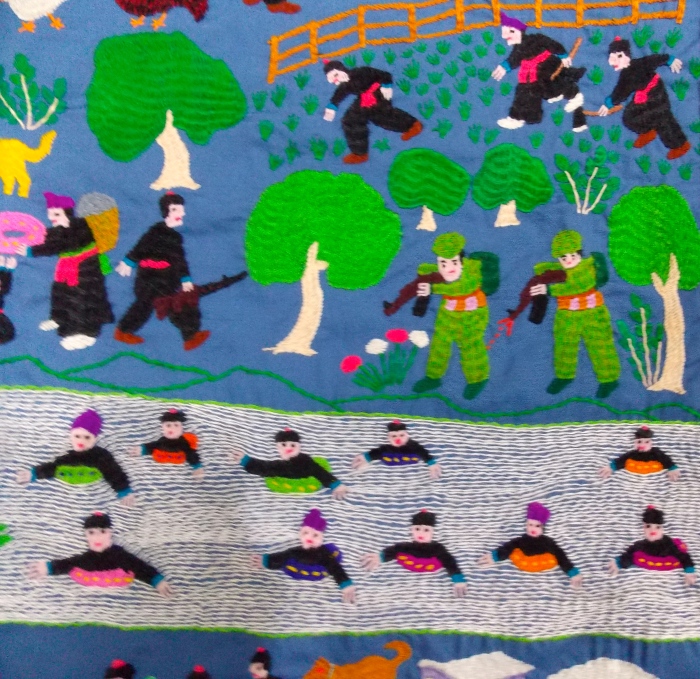 They were in danger at each step of their escape.

The Hmong then made it to refugee camps, their next step to their new life in the United States.

Safe at last, but a new life as refugees awaits.

I also own several picture embroideries of what traditional Hmong life was like before the move to Wisconsin.  They were farmers, and lived a very rural life.  The adjustment was difficult, but it was felt that we “owed them” for their help to the United States during a very difficult time in our own history.

The Hmong are a good example of how we can enable refugees to come to the United States.  Most groups were sponsored by churches, and it is many churches that are offering to sponsor Syrian refugees to the United States.  The differences in culture and heritage and traditions will be very difficult to over come. Liberal groups may find the conservative viewpoints of some refugees very hard to accept. 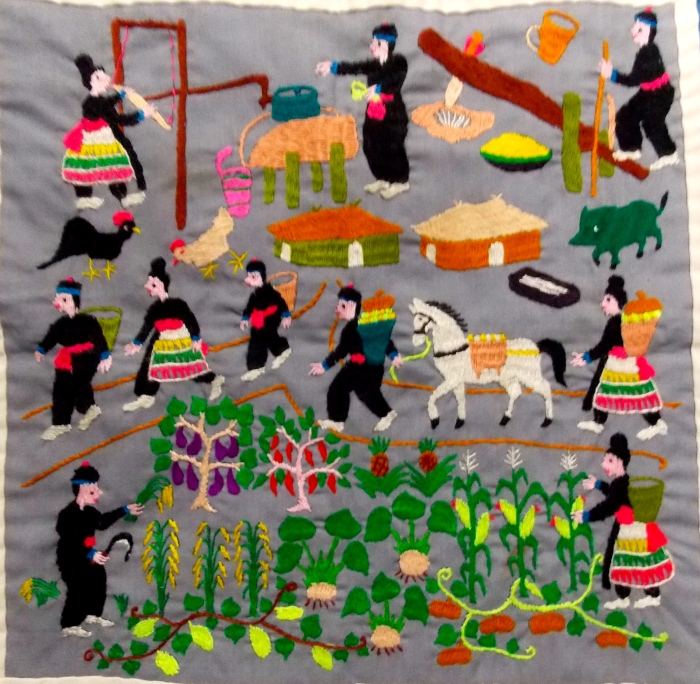 An embroidery showing what life for the Hmong was life before coming to the US. Very traditional farming life.

No they probably won’t be supportive of feminism. They might treat animals, females and gays in ways reflective of their upbringing, not ours.  They also might complain.  Refugees at the internment camp near where my husband works in Amsterdam have gone on hunger strikes because they dislike the food.  Also men don’t feel they should help clean the camp, as that is women’s work.  They dislike having gay volunteers come to the camp, as they don’t want them around their children. This doesn’t make them bad people, it makes them people that have been raised and educated in a manner not in keeping with a new modern Holland.  Remember, not long ago women working ,and people being openly gay, were also problems for the average citizen of Amsterdam.

We just can’t be open and accepting of people that reflect our own beliefs or background.  We can’t expect those coming here to immediately accept our own open views.  These views are still pretty new even to the United States.  The story of the “Good Samaritan” isn’t that we should help someone in need, it’s that we should help EVERYONE in need.   It’s never easy, but then nothing well worth doing is easy.