The following piece was originally written and posted 10/5/10 on my blog atwww.dimland.com.

This past Sunday afternoon was one of those glorious fall afternoons which I wish I could save to enjoy on a mid-winter day. Clear blue sky, cool air and crisp leavesunderfoot. And on that day, mere minutes after his friend had left from their play date;my boy asked if I wanted to take a walk to the bridge. It’s a pedestrian bridge that takeswalkers, joggers and bikers over the nearby railroad tracks. The bridge is just a few blocks away, not far to walk. Considering the pleasantness of the day, I thought it would be an excellent time for the impromptu walk with my son.

And it was a pleasant walk. He ran ahead, just a little, as he likes to do, asserting asmidgeon of independence at the age of seven. Boy! He’s growing up fast. He was mindful, however, not to get too far ahead of old Dad. Bad knees. 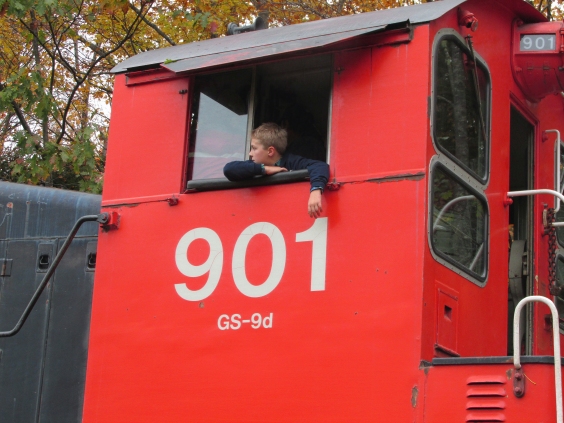 walks for boys should be for dreaming about trains – Kitty

We arrived at the bridge (we have yet to actually get there as a train passes under, but perhaps someday). It was apparent someone had been there before us. They had left their mark.

Graffiti. Vulgar, crude, sexual. It became time for an unscheduled lesson in life for my boy.

My son reads really well. Fortunately, some of the writing was so bad and much of it misspelled that he didn’t quite get it right. I didn’t correct him. (It was “va jay jay”. I let that one pass.) I did, however, do my best to explain that ‘n—ga’ is an offensive word (I know the arguments against there even being offensive words, but he’s only seven). I told him it’s a mean word used to describe people who happen to have a different skin color than us. And that I didn’t like the word and never use it. I advised him to never use it either.

Walking away from the tags, hoping to get past lesson time, I heard my boy ask,“What’s this?”

There in his hand was a used condom.“Drop that, right now!” I said. I then kicked it through a crack in the bridge pathway.I’d say it was “used,” but I can’t be certain of that. It was out of its package, but it didn’t appear to be…full.

Ah geez! “Thanks a lot,asshole!” I thought about the person that had left it there. I told him it was sort an adult balloon. Something adults use. Something he didn’t need to be concerned about for now. He told me he thought he might know what it was for.He said, “Is it for your privates?”

Well, then I answered yes. I told him that sometimes men wear that on their privates.Worn to prevent pregnancy on certain occasions when men and women are “together.” I again told him that it was something he didn’t need to be concerned about yet. That I would talk to him all about it when he gets a little older.

He was happy with that.Phew!We walked back home, my boy grown up just a little bit more than before that walk. Alittle less innocent.We arrived home and I sent him straight to the bathroom to wash his hands. As he waswashing up, I told his mother of the incident. She immediately had him wash his hands again.I think I’m going to bring some paint and a brussh down to that bridge. Got some grafitti that needs cleaning up.

Jim “Dr.DIm” Fitzsimons lives in St.Paul, MN and works as an office manager for a janitorial service. He is a graphic artist, cartoonist, and portrait artist. He has a wife, Amy, and a ten year-old son, Hayden. Jim hosts his own internet radio program (Saturday nights at 11 Central) called Dimland Radio on the Z Talk Radio Network at http://www.ztalkradio.com. Z Talk Radio is mainly a pro-paranormal station and Jim is their resident skeptic. You can view his online portfolio, buy stuff at his CafePress shop, and read his blog at http://www.dimland.com. Please like his Dimland Radio page on Facebook. It will make him smile.