Home › Family › One of these Room Mates is not Like the Other….

One of these Room Mates is not Like the Other….

My husband and I are often considered opposites.  He’s neat and tidy, and I am rather messy.  He’s a trained engineer and his jobs have always required meticulous attention to detail and safety.  I’m an artist, and my work depends on being spontaneous and yet also focused.  Sometimes that focus means forgetting about things like laundry and dishes when I’m working on a project.

People wondered how our marriage would work.  They need not have worried because Mark had been “broken in” by his college room mate.  Paul was a bit of a mess, and far more laid back than practical hard working Mark. Mark needed to learn the joy of being with someone that believes life doesn’t come with a rule book before he met me! I owe Paul.

Mark jokes that we balance each other out.  He claims if he had married someone like himself, his life would be organized, neat and so boring.

I know if I had married someone like myself, we’d probably be living under a bridge somewhere, wondering when was the last time we had paid income taxes.  He brings a sense of order and reality to my often far too creative life.

Opposites attract.   Or rather opposites often know they need each other to survive.  We have also learned from each other.  I’m much neater, and trying hard not to be a hoarder.  He’s much more likely to be open to new things, without me even having to beg and bat my eyes.   I have to admit the Asian Fusion Vegan Dumpling restaurant (aka “The Dump”) was a mistake, but at least we tried it! 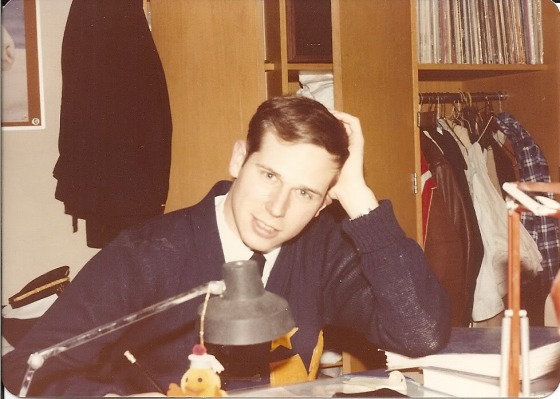 Mark, wearing his letter sweater! He needs laid back people in his life.

You can’t hide from your room mate, so you learn to appreciate him.

Little did he know, he was just trading one laid back messy room mate for another!