justpaperskater and I exchange stories by giving each other a word which is the seed for the next correspondence. This is my response to her choice of “Chameleon.”

Americans seem to have woken up to the fact that chameleons are not found in the US, and that the small lizard sold in pet stores as the “American Chamelon” is actually an anole. I had these are pets at several times during my life, and a few stories emerged. This is the story of Simon. (My son Simon is NOT named after the lizard. The lizard was named after Simon in Lord of the Flies.)

I bought him from Armstrong’s Animals, a small pet store in my home town of Salem, MA. Simon was special because at some point his tail had broken off and all that remained was a cute little club.

I made a nice terrarium for him with a log, moss and a tiny water feature, and so far as I could tell he seemed quite happy there. He would cock his head at me and jump about his cage, and seemed very eager to enjoy whatever morsels I had for him. Anoles eat only living things, so I had to buy baby crickets every once in awhile. I soon learned that it was easier to catch food for him, with spiders being a favorite.

One day as I was staring into his plastic enclosure, I saw some movement on the water. A minuscule transparent bubble with legs was slowly walking across the surface. It was at the absolute limit of my vision, and as this was the pre-Internet days, I had no way to find out what it was. Years later I learned it was a tardigrade*. If you don’t know what that is prepare to be amazed by the link. My pet apparently had his own far more interesting pet.

That summer, I got a job driving a school bus at a summer camp in New Hampshire. I saw no reason that Simon couldn’t come. Though I slept in a tent in the woods, Simon would follow me around. He had little choice really, as I was carrying his cage. I made him a special shelf in the school bus and the kids though it was cool that the bus driver had his own lizard.

A child named Kevin didn’t seem to fit in with the rest, so I decided to take a risk and let him be the ONLY KID who could hold Simon. And to my relief, he was gentle and didn’t let Simon hop off into the pine forest. This special status didn’t help Kevin get along with his peers, but he would follow me around as I set up various camp activities. He’d tend to Simon (which meant staring at him in his cage) while I set up nature trails or put out boxes of government issue raisins and peanuts.

One morning as I was setting up archery targets, I gave Simon to Kevin. We were talking about Star Wars I think, and as I was tying a target to its stand, I heard wizzz THUNK. I turned around and there was Kevin, arm outstretched and bow vibrating in his hand. He had fired an arrow down range at the very target I was working on, and he hit it.

At that moment I realized that what Kevin needed wasn’t an “adult” (I was only 18) friend, but perhaps a bit of counseling from a trained professional. Rather than start screaming at him, I calmly reiterated the rules about archery equipment, and asked him to promise to never fire an arrow outside of archery class ever again. He agreed, and there were no more incidents.

After camp ended, I went back to Salem College in Salem WV, and Simon joined me. We had a lovely semester together with no real incidents. It was one of the happiest periods of my life truth be told, and having Simon there just seemed perfect somehow.

When Christmas break came, a friend who was flying home asked if I could watch her hamster. The hamster’s cage was big and my car was small, so I had to figure out how to get it to Massachusetts and back. I hit upon the bright idea of collapsing the hamster’s cage, which saved significant space… and then… hmm, Simon has a cage…

Not knowing how an anole and a hamster would co-habitate  I carefully constructed a wall and gave them each half of the plastic cage. It was smaller than a loaf of bread, but I figured it would be fine for a 17-hour car ride. Simon had always just sat there during our many bus rides together, and I figured the hamster would curl up and sleep. 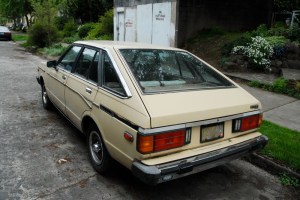 At about the 4 hours mark, we pulled over in some forgotten coal town and I opened the hatchback to check on the critters. I saw the hamster (whose name was “Teddy” I think) sitting in a corner contentedly doing that “mad-scientiest-hand-rubbing” thing that animals seem to do. I didn’t see the anole at first.

Anoles are confused with chameleons because they both change color, so I figured he had turned brown and was blending in with the cedar chips and sticks. But then I noticed that the wall between the hamster and the anole had a perfectly round hole in it. I had made the wall out of available materials, and those materials were cardboard. The hamster had chewed himself a door, and now had access to the entire cage. In fact, he had the entire thing to himself.

Simon was no where to be found. He had either escaped (I could find no holes in the cage), or the hamster availed himself of the protein as a road snack. If he did so, he left no trace at all. 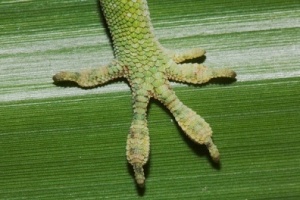 I tried to be philosophical about it. Simon had killed and eaten dozens of spiders, crickets, grasshoppers, worms, beetles and ants in his life. Why not meet his demise at the chattery hands of a hamster? And if a cat should eat the hamster, hakuna matata and all that. But even though I cared for the hamsters needs that weekend, I could never care for the hamster, and I was happy to hand it back at the end of the trip. Simon may have never known that I existed, but nearly 30 years later—nearly 10 times the normal lifespan of an anole, I remember him.

*Some have questioned whether it’s possible to see a tardigrade with the naked eye, but I’m convinced that I did. I an nearsighted with extremely good close up vision, and this was about the smallest object I could discern.