Home › History › Pierce Homestead, and why I’d like to be a guide there

Pierce Homestead, and why I’d like to be a guide there

President Franklin Pierce, New Hampshire native and our 14th President, was born and raised in Hillsborough.  I live one town over from Hillsborough, in the small town of Antrim.  The state of New Hampshire has a peculiar relationship with Pierce.  It’s hard to like him.  Still he was president, and he was from New Hampshire.

I would love to give tours here, I might go off script a bit.

The lake my cabin sits on the shores of “Pierce Lake” is named after Franklin Pierce.  It’s the least the state could do though, as in creating the lake in 1926 to help prevent flooding in Hillsborough, Pierce’s birthplace was covered by water.  When I’m out on my boat, I know vaguely when I am floating over the foundations that are all that is left of his birthplace.  Let’s face it, they would never have done this to Lincoln.

What Hillsborough does have is the home of Pierce’s father.  Pappa Pierce was a hero of the Revolutionary War, and a successful businessman.  The Pierce homestead is a beautiful Colonial home, that at one time was part home part tavern.  It is filled with memorabilia from all the Pierce family.

Papa Pierce is the more admirable. The sign lies, the birthplace of Franklin lies under a lake now. The town is fudging with this plaque.

So why the rough treatment for Franklin?  Well, a docent or guide has a hard time finding anything nice to say about him.  The guides tend to focus on the family, though perhaps growing up in a home/tavern influenced Franklin’s fondness for the bottle.  There is also the need to explain just why he was the only sitting president not renominated by his party.  The only one.

Pierce is often credited with causing the Civil War, by his pro Southern policies.  You can complain about Presidents engaging our country in long drawn out wars overseas but it’s hard to beat causing a long drawn out war in our own backyard. 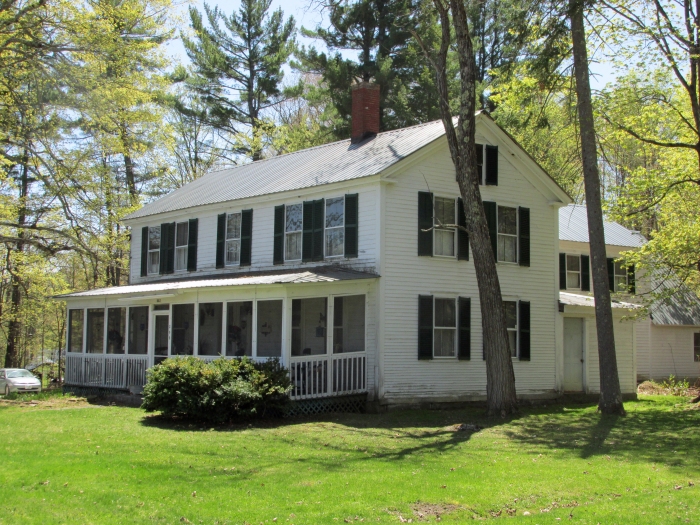 This nearby home was once lived in by Pierce and his wife Jane. She did not approve of her husband’s family (they had run a tavern!), so eventually they moved to Concord.

Then there’s Mrs.Pierce. Jane Pierce was an intelligent, yet deeply religious woman.  It is hinted Pierce married her thinking she would help balance his tendency to drink.  Jane is known for being the most unbalanced of our first ladies.  I know, Mary Lincoln gets all the press for being a believer in the spirit of Lincoln contacting her, over spending, hysteria and her family trying to commit her to an asylum, but Jane’s behavior makes Mary look like a tranquil oasis of sanity.

Jane had good reason to lose it.  She had two sons die young, but the death of her third child she was obsessively over attached to, was the tipping point into religious mania and over all general nuttiness.

The Pierces third son was decapitated before his parent’s eyes during a train accident.  The young child’s head is said to have rolled along the rail coach to end up at the feet of his mother.  Jane was said to roam the upper floors of the White House all night, wringing her hands and scaring the staff.  She wasn’t known for her parties, fashion or sense of humor.  She spent most of the rest of her life embroidering samples for the walls with the most depressing Bible quotes she could find.  “Hell fire, damnation and this world simply sucks but just wait until the devil gets you” seems to be the general point she was trying to get across with her needlework.  Also whatever you were doing, and especially whatever Franklin was doing, she was against it.

I imagine as a guide retelling the decapitation story over and over to tourists  withthe  whispered climax  “…and then the head rolled along the rail coach only to stop at the feet of his mother where it looked up at her with a look of frozen horror …” would give real meaning to my life.  Alcoholism, rejected by his own party, insanity, lying about his war record, and a nick name of “Fainting Frank”, you might think this would give any guide more than enough to enthrall any tour group.

The upstairs front is on big long room. It was used for dancing or extra beds were thrown in when the tavern needed to put people up.

We have to explain about Pierce’s Vice President, William King.  Rumor abound that King was the lover of President James Buchanan.  King was probably the only Vice President to serve his entire time in a foreign country.  King was in Cuba suffering and ultimately dying from Tuberculosis.  He was given the Vice Presidency as a “thank you” for being a good party member, and despite his nick name of “Miss Nancy” (ahhh, people kid) he was beloved enough for  the party to bestow upon him what they knew would be a final honor.  King died 6 weeks into the Pierce presidency, never having returned to the US.

During the tour I took I had to ask “Wait, so who was Vice President after King died in Cuba?”  The answer was “No one”.  At one time, if the Vice President died, no one seemed to care.  I know the office is often belittled and joked about, but the necessity of having a clear chain of command if something happens to the president seems important to me.  Obviously in 1853 when King died, an age of primitive medical treatments and the ever present danger of death from infection, yellow fever, tuberculosis and typhoid, no one  in power seemed to think lacking a vice president even worth worrying about.  “Heck, why not give it to a man known to be in the last stages of an incurable illness!” seems to be the thinking.

My own thinking is that this summer I am too busy to dedicate the volunteer time necessary to be a guide at the Pierce Homestead.  Still that won’t keep me from thinking of next summer, and practicing my story of the soap opera that was the life and presidency of Franklin Pierce.

I also imagine, years from now, guides at the Bush Ranch, “Yes, he was a pretty bad president, but at least his wife wasn’t crazy like Jane Pierce!”  Finding something nice to say about some presidents is pretty difficult, but with Pierce it’s always Busheasy to find something interesting!