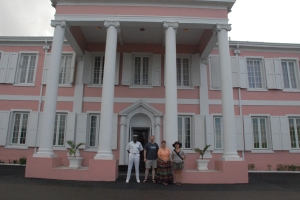 Bahama Government House with Jeff, Paperskater, and myself.

If you Google anything regarding staircases in the Bahamas, you end up with descriptions of the Queen’s Staircase in Nassau, which I wrote about last fall here. I’ll get to that in a bit.

When Jeff, Paperskater, and I went on our mini-trip in December, taking advantage of Jeff’s opportunity to snag us a suite on a cruise ship, instead of wandering around the town immediately off the ship dock, we hired a taxi for four hours and asked him to take us someplace less seen by tourists.

The view from the Government House

The first place we stopped is at the Government House. This isn’t totally off the tourist trail, but it is less seen by people who prefer to hang out in those awful port areas eating at Hard Rock Cafe and buying stuff from the straw market that was probably imported from China. There are some security guards, but people are allowed to go up to the front steps. Being on a hill, you can look down over the central part of the city. We had a nice chat with the Bahamian army guard. How do they keep their uniforms so white?

Back gardens at the Graycliff Hotel

Our driver then stopped at the Graycliff Hotel and guided us inside. Even though we weren’t guests, they allow visitors to see the lobby and dining areas, and to roam around the grounds. It is a truly gorgeous hotel. Sure, the Atlantis might be fancier, but it’s gawdy and you’re one among hundreds of guests.

Elegant hotels like the Graycliff cater to the individual. Built as a home by a wealthy pirate in 1740, it was later used as a headquarters by the American Navy during the Revolutionary War (after Nassau was captured from the British); by blockage runners during the Civil War; and by rum-runners during Prohibition, being owned by friends of Al Capone. British nobility acquired the house in the 1960s, and played host to the elite of England. In 1973, an Italian couple turned the residence into a luxury hotel. They even have their own cigar and wine labels.

Suite at the Graycliff. I’d love to sit on that balcony in the morning. Photo from hotel web site

As expected, it’s expensive. The main rooms are around $350, luxury rooms run in the mid-$400 range, and the suites are $700 per night. The rooms are elegant and quiet, and the grounds are lush and private.

Paperskater climbing up the “pirate” staircase

I elected to guard the entrance. We also went to the bat cave: they might have followed us.

Our last stop before lunch was a place also recommended by the taxi driver. In fact, when we asked him to take us to lesser-known places, his first question was “Have you been to the Pirate’s Staircase?” That was immediately intriguing. After the first two stops, we drove to the other side of the island, and stopped on the edge of a beautiful cliff overlooking clear blue waters. In the distance offshore, we could see tankers bringing fuel into a nearby terminal (the Bahamas have to import nearly everything).  Here, steps were carved into and through the rock, leading down to the surf below. The driver told us an involved story about pirates cutting

View from bottom of stairs

these stairs, and using them to smuggle goods on and off the island, and there was a small sign proclaiming the same.

Nearby, there is a small park area filled with carved statues – women looking out to sea. The driver was very nervous about us slipping and falling on the wet stones, or tumbling down the staircase. He said he sometimes brought divers here, those who wanted to get away from the crowds. I wasn’t wearing climbing shoes, so I stayed at the top and bravely let Jeff borrow my camera when he and Susie ventured down for a view.

The problem is, we could not find any verification of his story. Google searches on “Pirate Staircase” lead back to either the Queen’s Staircase, or to links about the Pirate Museum located in the city. Jeff found some references that indicate the stairs may have been created for a movie. So far, it remains a mystery, but shows that you need to remain skeptical about what you’re  told, especially by someone who is expecting a tip.

Our last stop before heading back to our ship was lunch, of course. Whenever I’ve eaten in places that are supposedly frequented by locals, I find that most of the food is heavily breaded or very carb-y, which is not my thing. I’ve not seen grilled fish, for example. However, the Sky Juice we had afterwards was very…shall we say…relaxing.