Home › Art › London with the Boys

London with the Boys

Part 4 of the Blood and Guts Tour

I had booked in the Green Park Hilton in London because I had accumulated enough points for one of the three nights we were staying in the city. It is  in the ‘posh’ neighborhood of Mayfair, which boasts some of the highest rents in the world.  Which meant the surrounding restaurants were expensive even by London standards. (Note to self: One free night is not always a bargain.) Also, it had no air conditioning, which in July is not really an option for comfortable sleeping.

Richard as a groundling

Our hotel faced a side street but was only a hundred feet from Picaddilly, so the noise made it impossible to sleep with our balcony doors open.  We dropped our luggage in the tiny room, and went to a nearby sandwich shop to grab a quick meal. After spending in excess of $30 for a snack, Travis announced that he wanted to return to Paris because, as he put it, “the food here sucks and it’s expensive.”  I pointed out that this is why you never seen British cookbooks for sale. 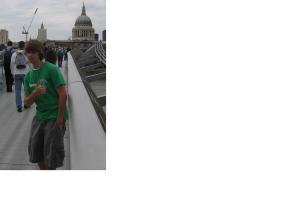 Trying to give the boys a taste of London in less than three days is not without a challenge, especially on a budget.  Not only did I want them to see some historical and cultural sights, I wanted Travis and Richard to learn to travel on their own. We bought Tube tickets, used the double-decker buses, had some taxi drives. I handed a map to Richard and had him navigate. He led us to the Globe Theater in time for a guided tour. He wanted very badly to see a play later that night, and offered to pay for the tickets on his meager funds, but I was so tired from the trip I knew I would be unable to stand and I didn’t feel comfortable letting two minors be out in London, far from our hotel.

Nice looking but no A/C

So, what did we see in the few days? I took them to the Tower, and to St. Paul’s Cathedral (which Richard knew from watching Mary Poppins 30 times as a toddler).  We stopped at a chain restaurant of sorts, and had fish and chips which were so awful my boys nearly refused to eat anything that didn’t come out of a package. However, I carefully read the chalkboards up and down Parliament Street until I found a more authentic pub that featured hand-cut fish and chips, your choice of mushy or spring peas, and nice ales. Their opinions improved by the sips of beer I allowed them but were later dashed when we were turned away from a pub later as being underage.

I’d been listening to Jerry Jeff Walker’s song “London Homesick Blues” since I was 16.

We spent several hours at the British Museum. As typical, Richard was fascinated by everything and could have spent a week, while Travis, explaining to me that he “really didn’t like museums” spent the afternoon texting to a girl back home. (In case you are wondering, the phone bill was close to $300 and yes, I made him pay for it.) We also visited a touristy attraction called the London Dungeons, and Madame Tussauds Wax Museum, which they thoroughly enjoyed.

I had also wanted to see the famous Harrod’s, especially the architecture. We found a nice reasonable place to eat in one of their many restaurants, and then split up for an hour. When we reunited outside, the boys reported that some security personnel followed them around a bit, so they had bought a snack in the food court and had waited outside for me.

My son. He also posed with Qaddafi and Saddam.

In retrospect, I know that trying to see too much in a short amount of time means that you really don’t see anything properly. I’ve been to London several times, and know what wonderful historical treats can be found, and how to find less expensive and savory meals. Tagging two days of a new city on the end of a full week in Paris was at a point where we were all a bit tired of 24/7 togetherness, but I think that our walking, strolls down New Bond Street during rush hour, and hunts for the perfect pint at least gave them a feel for travel, and encouraged them to do more in the future.