A dish that I make when I’m going to have a lot of company in for a casual meal, or that I cook and send home with my sons when they visit, is pulled pork.

I used to make sort of a fake pulled pork using a tenderloin in my slow cooker, with almost no water and minimal spices, that I would then shred up and add a sauce. Any recipe that starts with “take a bottle of KC Masterpiece” isn’t really barbeque.

This is much better.

First, you need a way to smoke the pork roast. About five  years ago, I bought a medium Big Green Egg, which I fill with oak or hickory lump charcoal (never briquettes), and then top with chunks of hickory wood, or sometimes a combination of hickory, mesquite and cherry. Being a Texan,* I feel you can never go wrong with mesquite, but it gives a distinctive flavor to the meat that can overpower the aroma and nuance of a slow-cooked pork. I typically get a very large pork roast of some type, such as a shoulder or a Boston butt – usually a 10-lb cut.

Since I’ve made this dish many times, I knew how to set the air dampeners on my Egg to maintain about a 250 F temperature for several hours. I decided about 10 pm Saturday night to put the pork on, instead of getting up early. I started up the fire, and waited for the coals to burn down.

I’ve tried several combinations of seasoning. Alton Brown recommends brining the pork overnight, which I would have tried if I had thought of it Saturday morning. As it turns out, I have a rather complicated recipe I’ve been using in recent years, and that people rave over. I’ve never revealed the secret, until now:

My secret ingredients. The one in the middle will vary depending on what’s in the spice cabinet

I dry off the pork, sprinkle heavily with fresh ground pepper and some sort of general pork-friendly spices (in this case, Penzey’s Bavarian Seasoning), and then coat it with plain ol’ French’s Yellow Mustard. And when I say coat, I mean layer it on so thick it drips off. That’s it.

Having prepared the Egg and getting the temperature I wanted, and adding the chunks of hickory to the top of the coals, I put the meat on the rack, above a ceramic plate so that it isn’t directly exposed to the flame. I closed the lid, waited 30 minutes and adjusted the air flow once more. Then I went to bed.

The next morning, about 7:30 a.m.,  I opened the still-hot smoker and found this.

You might notice that there is a thick fat cap on top of the pork. Depending on the cut, the fat might be all in one large sheet, or marbled throughout the cut. I don’t remove it until after I finish cooking. When I remove a big long-cooking piece like this, I’ll often throw on a couple of pork chops, burgers, chicken pieces, or a nice piece of salmon and cook that using the residual heat. Here, I had two marinated pork chops  prepared and frozen a couples weeks ago. I left everything on for another four hours.

After a bit of cooling, I used two forks, and my fingers, to pull or coarsely shred the pork.  I didn’t shred it too fine,  to help keep the meat moist. I also made sure that the outer crust was  well mixed into the meat. It has those wonderful flavors developed by the Maillard reaction as well as the dry rub and mustard.

That’s about it. The usual way to serve pulled pork is on a nice fresh bun, with some coleslaw beside or ON the sandwich. I also like some cold crisp pickles. If you’re careful with the meat, it won’t need any sauce, but if you are a fan and don’t want to make your own, I recommended Stubb’s sauce. I used to go to his restaurant back when I attended college at Texas Tech (the bathroom ‘door’ was a fabric curtain pulled across). It’s not a sweet sauce, which I think is a venial sin, and has a nice kick. 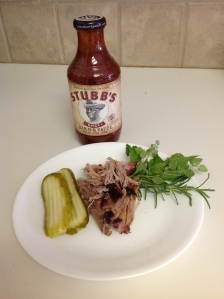 A bit of pulled pork, a pickle, iced tea or a beer, some cole slaw. What more could you need? Maybe watermelon or home-churned ice cream?

There you go. Pulled pork. Have it at a party with plenty of cold beer and side dishes, or package it up for the freezer and share with your friends and family.

*As a Texan, I know that our State Code requires that we prefer beef barbeque. I do. I can do this with briskets, as well.

Like Loading...
‹ …and sometimes you find yourself in a room with a chocolate penis and your daughters
When a banana is more than a banana, psychic banana! ›