Home › Travel › Loving County Part 1 – Crappy Places to Be From

Loving County Part 1 – Crappy Places to Be From Loving County, Texas is the least populated county in the lower 48 states. Located in western Texas, near the point where the southeastern corner of New Mexico juts into the Lone Star State, it’s a vast, flat prairie of grasslands overtaken by invasive mesquite. The population of 82 people (2010 census) gives a density of 0.0995 people per square mile (compared to New York City at 67,000 per square mile).

The county seat of Loving is a crossroads called Mentone, which was named by a French surveyor for Menton, France. The original site of Mentone, founded in 1893, was abandoned about 1905 and reestablished in 1931 at its present location. Loving County was named after Oliver Loving, half of the Goodnight-Loving group who drove Texas Longhorn cattle into New Mexico, Denver, and Wyoming during the 1860s. Loving died near here after an attack by local Comanche tribes. 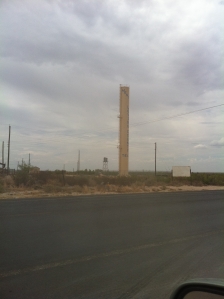 The only water tower for miles around

According to an area reporter, in its heyday Mentone “boasted five cafes, five gas stations, two hotels, two drugstores, two recreation halls, two barbershops, a dance hall, a machine shop, and a dry cleaner.” All this served a population of 600 souls, at the peak of its population in the late 1930s. 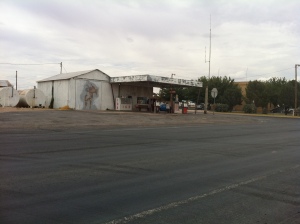 The only business in Loving County

Currently, according to the 2000 census, Mentone has about 11 to 19 people, depending on who you ask. There is no café, a small post office (the only one in the county), and a gas station that is open whenever the owner feels like being there. The station has old-style mechanical pumps, and they take cash, only. 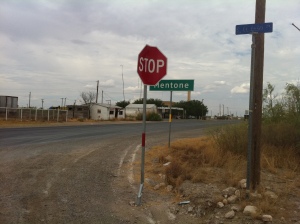 Downtown Mentone. Actually, all of Mentone.

Too bad if you’re empty and have only your credit card, because the next nearest gas stations are in Pecos and Kermit (22 and 32 miles, respectively). You can buy soft drinks, chips, tobacco and, this being rural Texas, assorted domestic beers. When it is closed, there are no retail establishments in the entire county. The county has no school district, as there are no school age children here.

Loving County is enjoying somewhat of a boom in recent years. Although oil was originally discovered in 1921, most of the original discoveries have been long depleted. New drilling technologies and rising oil prices have once again made it profitable to produce in this area. The formerly lonely county roads, mostly unpaved and topped with caliche, are now bustling with rigs, water trucks, pick-up trucks. 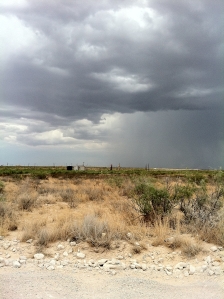 First rain in almost a year 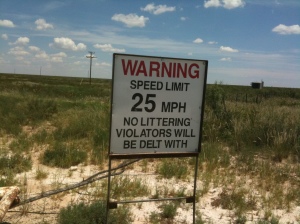 Located in the Chihuahuan Desert, Mentone has extremely hot, dry summers. We started up our new gas processing plant near there last summer. During July, daytime temperatures were sometimes over 120 F, which would drop to the high 70s shortly before dawn. The drought of 2011 was especially hard on the area. We’d stay in nearby Pecos at night, and by 7 am, nearly every convenience store in town would be out of ice. 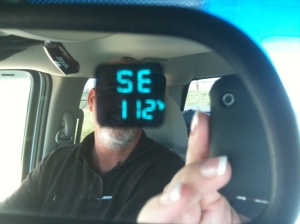 Early June and already this hot

Local fauna include road runners, jack rabbits, rattlesnakes, and dunes-sagebrush lizards, the latter being considered for the endangered species list, but which were running all over the plant site and nesting in the shady areas underneath the tanks.