Home › Food › Flaming Drink and Dancers at the Mai Kai

Flaming Drink and Dancers at the Mai Kai

The Mai Kai restaurant in Ft. Lauderdale Florida is unique.  It’s a restaurant where the decor has seen better days and the food is not very good,  but I highly recommend it.  That is because the Mai Kai isn’t just a restaurant.  The Mai Kai might best be described as a living museum. (See our previous comments about Mai Kai at “Friends and Flying Pigs”.

Once upon a time there was no television. If you wanted entertainment, you turned on the radio, you picked up a musical instrument, you read out loud, or you went out to be entertained.  I have family members that remember attending the movies several times per week. Adults would not just go out to dinner.  Adults would go to a supper club. If you watch enough old movies on TCM, you are sure to see sophisticated adults, perhaps Myrna Loy and William Powell, at a supper club. In the movie “After the Thin Man” Penny Singleton breaks out in song while people are celebrating New Year’s Eve at a Chinese Restaurant. Another supper club/night club from the Thin Man series featured a West Indies theme.

To have that same sort of experience today, I recommend the Mai Kai. The waiters, dressed in white suits, seem to have been doing their jobs forever.  The decor is dark and intimate with a theme of thatched native huts and tribal masks. The food probably hasn’t changed in years.  It’s a mix of Chinese, Asian and just plain old bland. But it’s delivered quickly to your table.  Reservations are a must, as the Mai Kai will be filled to capacity on any given night.  Dinner, while only acceptable,  should be accompanied by frosty drinks.  Desserts are simple, but what really makes the meal memorable is a rum toddy that literally drips fire. I’m not sure a drink that flammable is legal to serve in most places! 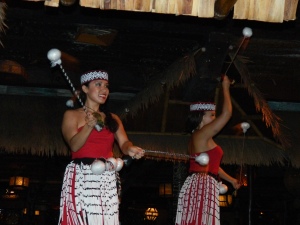 The most important reason to visit the Mai Kai is the floor show. The dancers put on an exciting show, that is G-rated despite hips shaking in ways you never imagined. Children are thrilled, and all eyes are on the stage. My favorite event is when the men dance with fire.  During my last visit to the Mai Kai, a torch was dropped and rolled toward the edge of the stage.  People at a table celebrating a birthday ducked UNDER the table. Entertaining with fire is always dangerous.  (The dancer went over after the show to bestow complimentary shell necklaces and pose for photographs. The birthday group was thrilled they had been almost set on fire).

The Mai Kai experience is something more than just going to dinner.  People dress up, even though I’ve attended in shorts. You feel part of an audience, not just talking part of   your table.  It’s frankly fun. Perhaps a bit tacky, perhaps a bit tattered, but you know in your heart the Mai Kai is a bit of history, that somehow survived into our modern world.