Home › Food › Having Children for Dinner

Having Children for Dinner

I am traveling for a few days, and I have a few thoughts about bringing young children to dinner. For the past three nights I have been at tables with very young children. The ages have ranged from newborns to about age 3. I have nothing against bringing children to dinner. As a parent myself I often brought my children along to dinner.  However, I tried to be mindful of the other diners. There are a few simple rules to make this a more enjoyable experience for everyone. The parents I have seen over the past few days haven’t a clue how to dine with a young child. 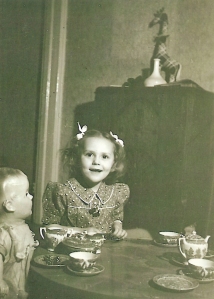 Kitty's mom, showing the proper behavior for young children at a meal.

I was eating at a Red Lobster Wednesday night. Now that isn’t a very fancy restaurant and one would assume it is a place where children might be brought along to eat. However, this was at 10pm at night. The place was packed with babies and young children. The children were tired. I kept thinking “this is a weeknight, and some of these children surely will be going to daycare or preschool the next day!” The behavior of the children reflected their exhaustion. My rule was eat as early as possible. Children have greater control over their behavior when they are not tired out.

Make sure your child is comfortable. One very young baby was crying and crying. The parents were simply ignoring the newborn. You could tell they just wanted a night out.  Babysitters are very expensive, and not everyone has family they can leave a baby with.  Still, there was something wrong with this baby. The best way to figure out what’s wrong is to think like a baby. I looked at what the baby was looking at. Sure enough there was a bright overhead light shining right in the poor baby’s eyes.  I simply went over and moved the baby carrier slightly, while saying “Oh I noticed that light was shining right in your her face.” The parents were very nice, and said “oh, we didn’t notice, we’re new to this baby stuff.”

Thursday night I ate at a very nice Mexican restaurant. Once again, it was nearly 10pm. Sure enough, I was seated next to a young family. Baby and toddler were both giving the entire restaurant a vocal accompaniment to their meals. The parents were using the totally useless method of saying “shh shh” between bites of their own meals. I reached over and handed the toddler my spoon. I told him “it’s a car”. Soon, the spoon was zooming around the table. While the toddler was still making noise, it was not wild screams and he seemed much happier.

When I took my children out to eat I had a survival bag. Matchbox cars, Cheerios (it’s hard to wait for food when you are hungry), little plastic animals, small board books. If my child began to make too much noise, it was OUT of the restaurant.  It never mattered if my own meal was there. The child was out of the restaurant until I felt the child could return. If upon returning the child was again loud, it was out for good with the food packed up. With my children, it only took one time of having to leave (and no ice cream dessert) before they got to be quiet in restaurants. Children are very fast learners. Are some parents are too lazy or selfish to sacrifice one or two meals to teach them this valuable lesson? I cringe when I hear a parent say “Hey, I paid for this, I’m eating it.  Why should I take my kid out?” They don’t understand a little sacrifice on their part means a child that will be wonderful to take out with them in the future.  Just not at 10pm at night, please!

A great reference for bringing up children as polite, contributing members of society who know how to eat with their mouths closed and not use other people’s legs as kicking posts: Miss Manners’ Guide to Rearing Perfect Children