The second night in our Quest to Try Every Restaurant in Weyburn, SK During the Coming Year, occurred after a long day of slogging through detailed design drawings with our review team, supplemented by a catered Chinese lunch. One of the team members, Tim, recommended we all go to Detours for food and drinks. 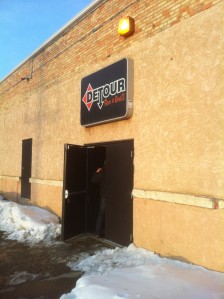 Detours is a large place featuring a full bar, pool tables, and the ubiquitous cheerful, efficient servers that you find everywhere in Canada. I ordered my new favorite drink, the Caesar (a Bloody Mary made with clamato juice instead of tomato), and a round of Pilsner for the rest.  The music, featuring an underlying heavy bass, probably appeals to the under-30 crowd (like Tim) more than the old geezers I tend to hang with. Based on my admittedly anecdotal evidence, the only TV channel available in Weyburn is the All-Hockey Network, which features commercials about curling.

The menu had some typical appetizers – nachos, spinach/artichoke dip, and the like.  Burgers, Sandwiches, and Entrees featuring some sandwiches and burgers, rounded out the menu. I took pause at one category ‘Rolls’ which had three selections: Dynamite, Broccoli and Cheese, and something with salmon. In Houston, anything with the word ‘roll’ is either yeast bread or something based on raw fish and rice. Which I was not going to order in Weyburn, as I am pretty sure that not having a commercial airport means it does not receive fresh ocean fish all that often.

Bob ordered the Rancher, which was the burger featuring bacon, cheddar, and barbeque sauce. I ordered a bacon cheeseburger, which wasn’t actually on the menu, with fries. Eric ordered a sandwich that had a fake Greek name and was described as being ‘like a gyro’ with tzatziki sauce, onions and tomatoes. He chose onion rings for his side.  Our dinner guests were all locals, and ordered a variety of burgers and sandwiches.

Since I remove the bun, which looked like a type of Ciabatta bread, I eat my ‘burger’ with a knife and fork, with the condiments and accompaniments piled on top. (Hey, it tastes like a burger!) It was pretty good, topping anything from a drive-through fast food chain but not up to the standard of a truly handcrafted burger. Eric said, of his sandwich, that the bread was bad, the sauce was good, and the meat was gristly and definitely not gyro.  We all tried his onion rings, which were crisp, hot, and definitely not homemade but enjoyable. Bob cleaned his plate, so either the food was delicious, or he was making up for his upset tummy at breakfast and lunch.

We had a good time with our dinner guests, and good conversation about politics in the U.S. and Canada, finding workers for our booming business, how the rest of the country views Quebec, and how Ottawa blames its financial woes on the healthy economy of Alberta.  If you’re in Weyburn for lunch or dinner, worth the detour