When Mexico Comes to New Hampshire

New Hampshire is a state known for many positive things.  Low unemployment. High levels of happiness and psychological stability among the inhabitants (even the Libertarians).  Beautiful lakes, woodlands and mountains to climb.

New Hampshire has few negatives, the first being it gets very cold in winter.  The second negative is that there is no really good Mexican food.  The first problem could be that natives aren’t used to what real Mexican food tastes like.  Taco Bell is about it.  “Cheap and a lot of it” seems to be the New Hampshire understanding of Mexican food.

It’s a basic building but the food is made fresh.

Also, we’re a long way from Mexico.  Most restaurants claiming to be Mexican suffer from a lack of Hispanic input.  It’s a non Mexican version.

But no more!  Because in Hillsborough New Hampshire (home of President Franklin Pierce, hero of the Mexican American War), there is a new Mexican restaurant.  It was at the urging of my friend Dale Roy that I drove into the parking lot near the Dollar Discount store and a second hand clothing store.  There, a new tarp sign doesn’t quite cover the sign for the Chinese restaurant that was there before.  It’s not an auspicious beginning, but Dale had assured me I would be pleased with the food.

A real selection, and ask for spicy! They can do any level of “hot” you can take.

Taco Beyondo lives beyond the name.  The food is excellent.  The pork is seasoned like a dream, it’s just juicy goodness in every bite. Also, there is a selection reflective of the variety of Mexican cuisine.  It’s not just the same thing served in a hard or soft shell.

The best part is the owners are cooking all of it right in front of you. It’s all fresh and all you have to do is “have it your way.”  If you ask they will be glad to take their normally lightly spiced food and spice it up to the standards of Texas or other border states.  If you can take it, they can make it.

The artwork may not be authentic, but it’s all about the food.

My husband and I have begun to look forward to our weekends at the cabin just for the food.  Taco Beyondo is not a must for every visit.  Sometimes twice in one weekend. 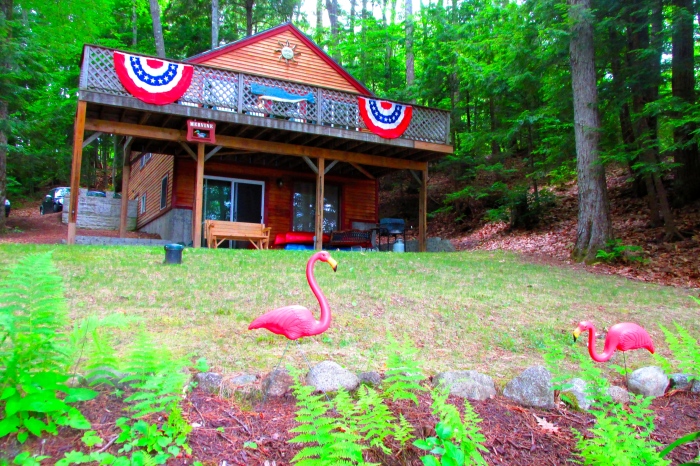 Even the flamingos are happy! Close to Canada but we can now have Mexican food!

While the state of New Hampshire might not have a clearer vision of what real Mexican food is like, at least those of us close to Hillsborough can enjoy a much more authentic version than fast food Mexican.  Fingers are crossed for this shop to soon be able to afford a real sign, and for it to have the success the owners deserve.

Mexican in New Hampshire?  It’s no longer a joke!