justpaperskater and I exchange stories by giving each other a word which is the seed for the next correspondence. This is my response to her choice of “contusion.”

I was about 14 and riding my fairly new 12-speed bike.

At the time, 12 speeds were seen as exotic as all anyone else had was a 10-speed. This was before mountain bikes.

Where I grew up was pretty hilly, and I lived near the top of a pretty steep hill. While I was in good enough shape to pedal up the hill, the real prize was getting to go down the hill really really fast. I got pretty good at judging stopping distances and such, and since these were familiar streets I was pretty confident in my abilities to go fast and stay on the bike.
A bit too confident. 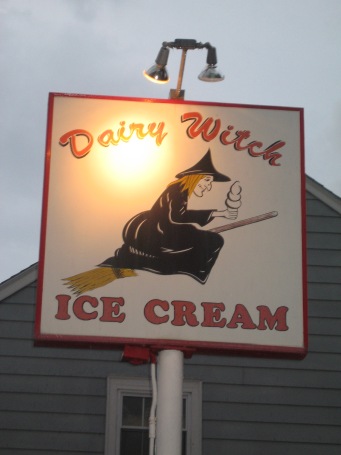 This particular day, I was heading down the hill planning to turn onto a street at the halfway point. (I think I was going to Dairy Witch, my favorite local ice cream place.) I gained up a good head of steam and banked into the right hand turn towards my destination. This was no problem – I’d done this a hundred times before. But what I didn’t know was that earlier that day the street sweeper had been by.

Being a steep hill, the road received and incredible amount of salt and sand in the winter. Once a year, the street sweeper would come by and attempt to sweep it up. It always did a miserable job, and the sand would simply move into the main roadway from the gutters. I was probably doing about 30 MPH when I hit a thin patch of sand, which had become as treacherous as the ice it was sent to mollify.
The back wheel instantly slid flat against the ground, and I tumbled, landing squarely on the on my forearm just in front of my right elbow.
Besides the inevitable road rash, I had a very nice and tender contusion that started out black and blue but gradually turned green. A few days after the road rash was nice and scabbed and the bruise had spread nearly to my wrist, I noticed my skin was uneven. There was a distinct bump, about the size of a pea right by my elbow.
It wasn’t tender, and it seemed to be deep in the skin so that I couldn’t make it ooze or anything. It didn’t really hurt, but it felt strange.
In school the next day, while day dreaming during class, I was feeling this bump when my skin suddenly separated an a pea-sized piece of gravel shot out of the wound, bounced off the desk and rolled on the floor with a distinct “ticking sound.”
I felt around for some more buried treasure, but all I had left was the mottled contusion that gradually disappeared.