While attending the wedding of our good friends Jeff and Jenn in Chicago, my husband suggested we stay at a hotel next door to a Giordono’s Pizza.  My husband assured me I would be in for a real Chicago treat. 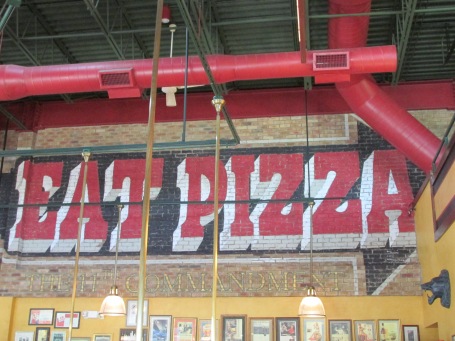 …eat GOOD pizza. Not to be found here.

My husband and I walked to Giordano’s and it was a Friday night.  We were rather surprised it was fairly empty.  Surely on a Friday night this place should be packed.  Still, it was with great anticipation we sat down and placed our order for a deep dish pizza with stuffed crust.

The waitress said “Our pizza’s take 45 minutes, can I get you something while you are waiting?”  I decided to order a salad, thinking a pizza probably isn’t that healthy so I’d balance it out with a salad.

The salad was, a real disappointment.  Giordano’s only offers a knife and fork.  I needed a spoon to eat this salad.  Wee small tomatoes, small bits of cheese and green stuff that was mashed.  I imagine that some salad shooter set on “Lilliputian” was used.  I could not even spear anything on the salad plate with my fork, as it was all so small.  I finally had to push my salad onto my fork using my knife to eat it at all.  A salad should look like someone made it by hand, not machine.

looks good, but that crust was so dry, the oven must have been set on “Sahara”

When our pizza came it smelled delicious.  The waitress cut into the pizza, gave us each a piece, and we were rather horrified.  It began to simply ooze.  It oozed out over our plates, until we had a flat mozzarella pancake.  The crust was not what I anticipated at all.  It tasted, if it could be said to have a taste, like a really cheap pizza crust that had been overcooked.  You know the pizza’s, the ones like Red Baron, that you get two for five dollars.  If you overcooked the cheap pizza, say you forgot it was in the oven, it would still taste better than the crust of our famous Chicago deep dish pizza.

the oozing starts….it just all slithered out.

You could not cut this crust, instead  you had to use the tip of your knife and chip away at it.  The famous stuffed crust consisted of what seemed to be one or two black olives that had made there way into the blackish brown cardboard flavored crust.

clueless how to eat this, and honestly, it was a just so gross Dry crust and gooey undercooked inside, that takes talent.

How to eat this?  We ended up inspired by spaghetti.  We were just winding the mozzarella around and around and around our forks.  I can not tell you how unappetizing a slightly warm stringy ball of mozzarella is.  It tasted like someone had taken a bunch of string cheese and melted it in the microwave before pouring it into a burnt shell.

We considered sending it back, my husband assured me that when he had been in Chicago less than a month before he’d had a dream of a pizza at Giordano’s.  He couldn’t figure out how they could make a pizza that had a burnt crust and an underdone filling.  We decided not to waste anymore time, after all if we sent it back we would have another 45 minute wait.  There was the thought that the same chef would be cooking this pizza also. 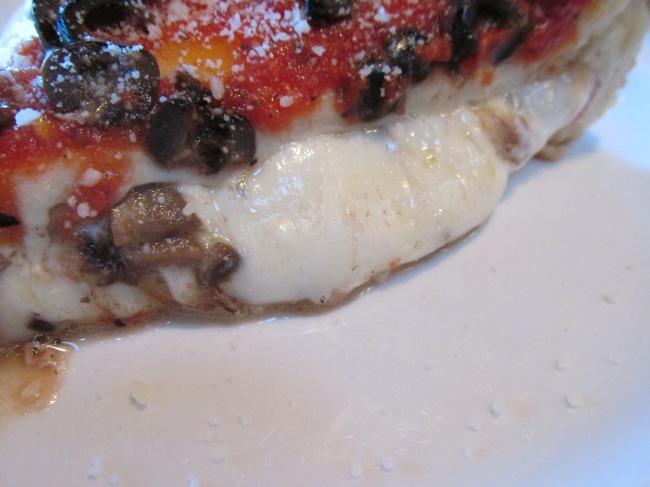 this makes me long for Red Baron, or that pizza you make from a box. Never met a pizza I did not like, until I went to Chicago

The waitress was surprised at our only eating two pieces.  Our plates looked like a small child’s when they try to cover up not eating their vegetables by just mixing up everything on their plate.  We had made only a few attempts before we gave up.

She packed up the pizza, which we took to be polite, and then dumped it when we got back to the hotel.  We noticed the restaurant was not filling up, and wondered if perhaps someone at Giordano’s might think about hiring Gordon Ramsey.  Or just firing the salad shooter salad maker and checking to see what was wrong with their ovens.

We ended up getting sandwiches from Subway, and spent the evening discussing just what went wrong.  While a deep dish pizza is not to the taste of many, I am a fan of any pizza.  My husband felt sad that the hotel he picked, just so he could show me the joys of deep dish, turned out to be next to a dud.

The rest of our visit was lovely.  We had a great time shopping, eating, drinking and attending a terrific wedding.

But I’m nervous about trying deep dish again, at least at Giordano’s.  I’m sure our pizza was a fluke, but it was a fluke of epic proportions.