Finding the Ark in Texarkana – More Crappy Places to Be From

This is an edited version a piece I wrote for my personal site a few years ago.

In 1984, I drove through Hazleton, PA with my Dad. We stopped for lunch, and couldn’t find a single restaurant still in business. Texarkana is like that, only much worse. Much.

There is a large hotel at the center of town. It dominates the city, with one of those large signs supported by a steel lattice on the roof. It reads: Hotel Grim. Grim indeed. Driving around downtown Texarkana is like haunting a ghost town. You can see where things used to be, but nothing is newer than 40 years old, and much less is still in business.

Am I being hyperbolic? Not really – I’m being kind.

I knew from reading a couple of articles about Battle Mountain, NV, voted America’s armpit in a 2001 poll, that there was something worth seeing here.

I tapped on the GPS “attractions” button and had it display the list within 50 miles. At the top of the alphabetical list appeared the Ace of Clubs House. Intrigued by the name, I pressed GO and and allowed the stern robotic voice to guide me.

Between two churches (they were still in business), I found it and I instantly understood its name. The house is constructed of three octagonal towers, with a “stem” of a rectangle in the middle of them. It looks very much like a club from the air. At the time it was built, Texarkana was a dirt street, backwater burg and this was probably the largest and most impressive mansion for hundreds of miles.

And it is impressive. 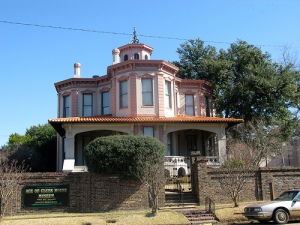 Ace in the Hole

I bypassed the front door as the signs demanded, and followed a narrow walkway into a dry moat containing a door. A peculiar sign read: “PLEASE DO NOT TURN KNOB. Squeeze thumb latch, and push open. Thank you.” After snapping a picture of this conundrum, I examined the doorknob. It was dark, as I was in a moat, and it looked all the world like a normal door knob. Instead of turning it – I was determined not to – I felt a round and found a thin metal trigger. I pressed it, and pushed, and voila! I was in what we would call in Vermont, a “mud room.” 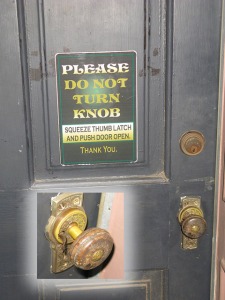 Odd electronic bells started sounding, and I knew I had triggered some sort of “Hey! We got a customer! button.” I wandered into the small gift shop, and started looking around.

And there it was. I’ve been joking this entire trip about finding “the ark in Texarkana,” and I had finally found it.

The guide charged me a modest $6 for the tour and explained that there is no photography and I must be accompanied by a guide. I decided to pen a rant about photography rules, and slung my camera behind me. 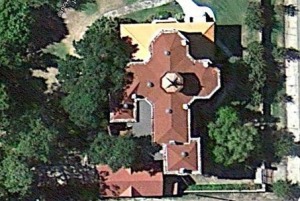 Get it now? The legend about the house being won in a card game are untrue

I was led into a basement rec room. “As you’re our first guest today, we haven’t turned on the lights yet.” They had been open for two hours, so I noted that it was the slow season. “Oh, please sign the guest register.” She pointed to a book on the counter, and I went over and signed. I noticed that in the date column where I put Jan 29, 2009, the last visitor had put Jan 24, 2009. Was I really the first visitor in 5 days? Given the manner in which she STRONGLY encouraged me to sign, I think I was.

She turned on an odd little historical VHS of the property, turned off the lights, and left. I watched impatiently, hearing from six actors portraying the six “matrons” of the house, and of their trials and tribulations in keeping the house clean. In this official history, the first matron told the story of how her husband had won enough money in a card game to build this house. Later on, I head an embellished version, in which the card that won him that giant pot was the ace of clubs, and that’s why he built the house that way. The curator later said that these were just stories, and visitors should believe what they wanted. I’d rather believe the facts, and my best guess on the facts is that this wealthy man didn’t gamble at those high stakes, lest he’d not be a wealthy man anymore. 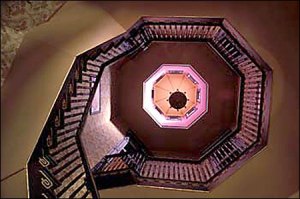 No photos? Fine, I’ll steal this one from arkansas.com

On with the tour! Rather than go by room and spew everything I saw and was told, I’ll now switch to summary mode. The house is a treasure. With its 14-16’ ceilings, ridiculous number of windows and mirrors, and unusual design, I was instantly taken with what a unique and well-kept house this was. She lead me from room to room – on two floors – and pointed out many little touches that made the house unique. Some of the rooms had doors like roll-top desks, the ice box was specially constructed so that ice could be loaded from the outside, etc, etc. I was charmed.

We spent the next two hours wandering the home, with me imaging what it must have been like to live here, to have dined with Jay Gould in the formal dining room, and how my own condo has so many more amenities in the way of bathrooms and kitchen than this upper echelon abode could have ever offered.

I mentioned to her (we never exchanged names) that this was the only thing to do in Texarkana, and she said “Oh, that’s not true. There’s a lot to do here! In fact, take this.” She handed me a CD audio tour with a map of all the things to see in Texarkana. When I got back to the car, I looked it over. There were fewer than a dozen spots, most of them drive-bys, and one of them was the post office. I was thinking that if I were making a road tour for Richmond, VT (pop. 4100), I could easily spend two hours and put 50 stops on it. And they’d all be interesting.

Still, I marvel at the fact that I’d had an in-depth private tour of an amazing piece of architecture for just a few dollars. It felt like an episode of the Twilight Zone. Oh and the aforementioned moat? It was more like a sunken patio that surrounded the house and it served as a passive form of air conditioning. Windows opened at the top of the house would draw in cooler air from the lower windows beneath grade. Very clever.

It was clear to me that the guide was proud of Texarkana, and I respect that, but I really do wonder why. Though I was incredibly impressed with the house and her tour (YES they’re enough reason to visit Texarkana), I just can’t say much nice about the city itself.

After my tour, I wandered up the hill and straddled the line between Texas and Arkansas at the only federal building that crosses state lines. I went inside (a volunteer at the Ace of Clubs House said it had been newly redone) and found an old fashioned post office in a terrible state of repair. The ceiling was collapsing, most of the lights were out… honestly, the post office in Fouke, AR was much nicer. (That’s another story.)

Only federal building to straddle a state line, the inside was disappointingly shabby

Looking out on the center of town… a large and confusing double-rotary with a somewhat disturbing monument to the Confederacy in the middle… I saw the Texarkana Historical Museum and headed there. 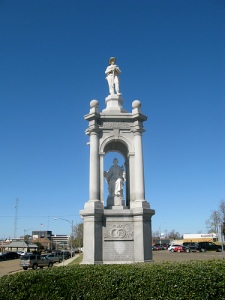 The theme: a mother who’d lost her sons

It took me a few minutes to find the door. The building was a huge brick affair, with a jutting tower a la Rapunzel, and was surely a previous headquarters to some important business or other. I entered, hoping to find out more about the Hotel Grim at least.

The woman behind the counter greeted me, and had me sign the guest book. They closed in an hour, and I was the 5th visitor. They charged me $5, giving them a grand total of $25 in receipts for the day, assuming everyone visiting was a full-fare adult.

The museum was honestly terrible. There was one interesting corner devoted to Scott Joplin and Leadbelly, with some of their original instruments and music samples. Upstairs, there was a too-brief introduction to the pre-Columbian tribe that settled the area, but that was it. I was out in 20 minutes, without a single picture.

I ended the evening at Outback, listening to locals say things I’d only heard on shows like Green Acres and Hee Haw.

Texarkana scares me. Not because the people were scary… they weren’t; they were friendly and helpful. It’s scary because this place is completely bereft of hope. It was built to support the growing railroad, and in America, the railroad is no longer growing. Texarkana has withered on the vine, and now only desiccated raisins remain.

Negativity aside, I remain convinced that every place has something interesting to offer. The Ace of Clubs House is the ark in Texarkana. I encourage you to visit – but don’t turn the doorknob.