The Pastry War of 1838: Franco-Mexican War, or Great Tequila Bar? It’s Both!

Under the category “little known battles that you would not know about unless you were a history buff or lived in that country”, I bring you The Pastry War, or la guerra de los pasteles as it is known in Mexico.  Please note: I got my information from Wiki and from a friend, Saul, who translated what I read to him over the phone, from a Spanish-language website. Very poorly read to him, I will admit. I suspect my Spanish has a bit of very bad French accent to it, thanks to my high school days.

The early days of the Mexican republic were a bit messy and lawless. When a French baker made a claim for damages to his shop after some rioting, the French government demanded 600,000 pesos from the Mexican president, at a time when the average wage was about one peso per day. In France’s defense, Mexican had defaulted on loans worth millions of dollars. 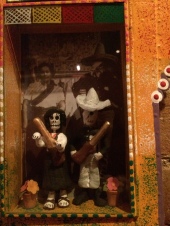 When Mexico refused to pay up, in 1838 the French navy blocked many of the Mexican ports. Smugglers brought supplies in through the port at Corpus Christi, which was then part of the Republic of Texas. Texas President Sam Houston was forced to send Texas troops to the port to negate  Mexican navy claims that Corpus was a Mexican port. Among the items abandoned by the retreating smugglers was 100 barrels of flour, which gave the name to a suburb of Corpus Christi, still called Flour Bluff.

Eventually Santa Anna (former president of Mexico and of the Alamo battle), who led some skirmishes against the French, was shot in the leg. The leg was amputated and buried with full military honors. (I wonder if you can visit the grave?Note: after this piece was published, I found this news article: Illinois Museum has Santa Anna’s Leg, and Texas Wants It) The Mexicans ended up paying the 600,000 pesos to the baker.

Some of the selection of tequilas

I told you all that, so I could tell you about this great bar in downtown Houston, The Pastry War. It’s a tiny brick-lined bar nestled on Main Street, which specializes in tequilas and agaves, along with some crafted Mexican and U.S. beers, as well as unusual mixed drinks (pureed cantaloupe?) My friends and I walked here on a warm summer night after a movie, and sampled agave margaritas and snacked on tamales. I don’t recall drinking agave before, but I know I’ve never eaten the worm (although I think that’s mezcal) !  I found the agave smokey, a unique but interesting change from the pepper of a tequila margarita.  If you have reason to be in downtown Houston, you might stop along this road, filled with watering holes, and try something new and enjoy the old building.

How to make tequila. Or something.