This week, I have to be on location at one of the processing plants my company designs, builds, owns, and operates. I’m sitting in the lounge-bar area, talking to some friends on IRC, reading the news, and sipping on a Cosmopolitan. I’m not a road warrior, but I do travel quite a bit on business.

Right now, I’m staring across the lounge at a guy in a baseball cap. When I came in, he was sitting at the bar. I asked the bartender for a glass of wine, and baseball cap immediately told the woman he wanted to open it. He explained to me, in slurred speech, that earlier he had opened a bottle for her, and it was the FIRST TIME he had ever opened a bottle. I think he was trying to explain how satisfying the *pop* was when he pulled the cork from the bottle. I’m watching him now. He’s sitting at the end of a group of tables, about 10 women of different ages, who are having a pretty good time. I couldn’t tell if he knows the woman he’s talking to, but if he doesn’t, he is definitely violating a personal space. And slurring his speech. And wearing a hat indoors. 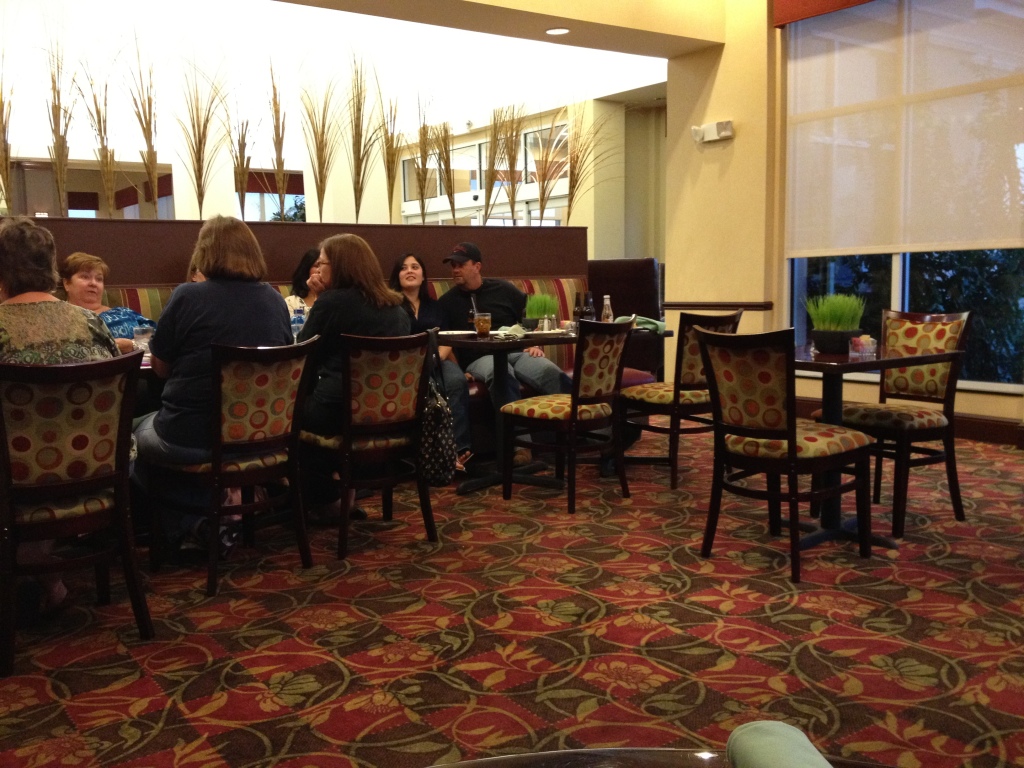 She just moved to another table, talking on her phone. Drunk baseball cap slid over to the next woman at the table.

When I arrived at the airport earlier today, I took at shuttle to a parking service where we store our company pool cars. A very large suitcase was wedged in the aisle, one of those kinds that takes two people to lift. I commented that someone must have been on a very long trip. It belonged to the young couple next to me. That was their suitcase for a weekend trip. Then her husband piped up. “That other suitcase is all her shoes.” The other suitcase was the size of a standard carry-on wheelie. I said ‘I guess you don’t travel a lot?” and she explained to me that she didn’t know what she might want to wear, so she takes extra. It takes a great deal of planning to pull two or three outfits together. It’s not like she was setting off on the Lewis and Clark expedition, where they didn’t even know what they were going to eat for two years. Where the hell in the US could you go on a weekend trip and not be able to pare your packing down to one carry-on?

The first woman left the restaurant. Drunk baseball guy is now talking to the next woman, but he’s not as loud now. I wouldn’t have left. I would have told the drunk guy to get lost, or found the manager. Several women in the group are not looking at him, very hard.

I’m staying at a Hilton Garden Inn. It’s a fairly new hotel, still shiny, with comfy sheets and a flat panel TV that I won’t turn on during the entire trip. This hotel is on a street lined with similar hotels: Hampton Inn, Holiday Inn, Comfort Suites, Fairfield. Two years ago these hotels were under $100, and last summer, around $200.

My two nights here will be $538 plus all the taxes. I’m not in a large popular city, surrounded by cool restaurants, a nightlife, and interesting attractions. Instead, it’s on a major street in town, and everything I can see for at least a mile around are car dealers, fast food restaurants, drive-through banks. And this is in the nicer area. Economic booms do strange things to towns.

The drunk baseball cap just stood up. I heard him say “I guess I better see if they have any rooms.” I already know they do not, as I got the last room they had. He’s in no condition to drive. Knowing where I am, he’s probably got a three-quarter ton four-wheel drive extended cab pick-up truck, so he’ll at least have a place to sleep. The remaining women aren’t telling him good-bye: they continue to laugh, and talk, and drink.

I’m going to finish my drink and head to the room. It’s not even 8:30 pm, but I have a 5 a.m. wake-up and long day ahead of me.  Did I mention my boss and some of the other managers are in Singapore for meetings this week? They took their wives along.

At least my hotel isn’t charging for WiFi.