Traveling in Israel: The Temple Mount 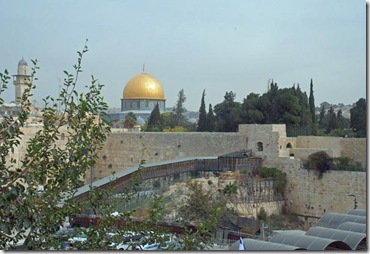 When you’re in Jerusalem, it’s not always easy to visit the Temple Mount. As a non-Muslim, you can’t go during the month of Ramadan. You can’t go during prayer times. Sometimes, they won’t let any non-Muslims in at all. We went in late October 2011, but I’ve read reviews as recently as August 2012 where people were refused entry. People who are wearing any symbols of a different religion, or shirts that mention Israel, are not allowed in. 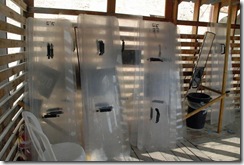 Immediately before entering the Temple Mount. Every person walks by these – they are strategically placed to be seen! 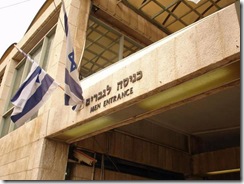 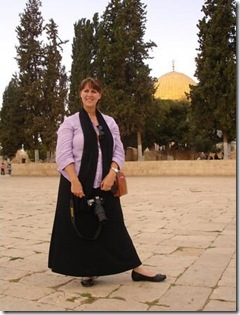 The day we arrived, we went in the morning hours. First, stand in line and go through an Israeli security checkpoint, with metal detectors and x-ray scanners for your bags. Since the minority-but-loud Ultra Orthodox frequently run over the mostly-secular majority, there are separate entry points for men and women. You then pass through an Arab (Palestinian) checkpoint, you cross a wooden bridge and come through a door. A Muslim man, wearing a casual shirt and sandals, stopped several of our group. Being aware of the customs, no one wore shorts or had bare arms, but some of the women were asked to cover their neck and chest area (collar bones being offensive). I had worn a black skirt that came to within a couple inches of my ankles, and a long-sleeved shirt. The ‘guard’ asked me where I was from, what I was doing in Jerusalem, and then finally asked me if I was Muslim. When I said no, he waved me through. 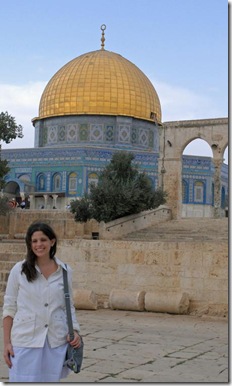 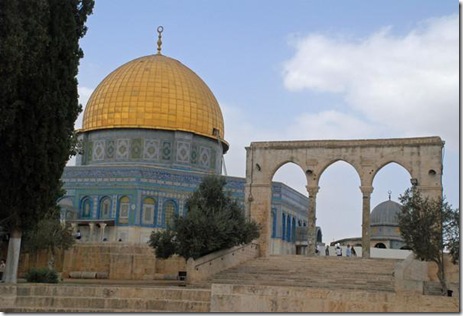 Dome from near entrance of Temple Mount 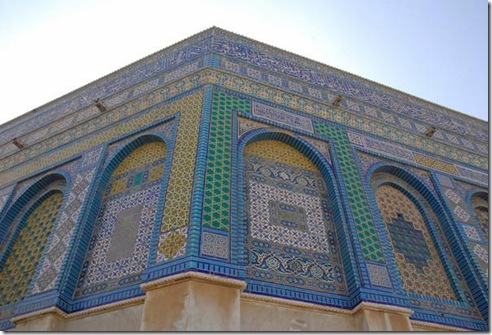 It took several minutes for our group to assemble before we noticed that one woman was still at the door, talking to the guard. Luciana had worn a modest knee-length dress, socks and flats. Luciana stepped into a room to put on a pair of black tights she had brought (and had to be guarded from being stared at by the guard). He still didn’t want to let her in, as the shape of her legs was apparent. She’s a Brazilian of Italian descent, with long dark hair and the beautiful complexion of Mediterranean, and apparently the guard thought she might be Muslim, and would not let her enter. When she finally convinced him that she was not Muslim, he let her enter. That’s how I found out that my bare ankles nearly kept me out. As Luciana later said, in her charming Brazilian voice “That’s the first time a man ever told me to put ON my pants.” 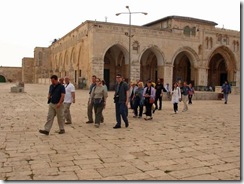 In front of the Al-Asqa Mosque

The Temple Mount is a quiet place after the din of the city. Mostly empty on the day we were there, we saw a few groups of people gathered under trees, while their children played soccer.  (Orthodox Jews are forbidden to walk on the Temple Mount area, for fear they might step on the unknown site of the Holy of Holies.) We walked past of the Al-Aqsa Mosque, and to the famous golden dome. It is usually not open to non-Muslims, so we did not see inside, but our guide (a Reformed rabbi) had been in year before and was able to describe the location, and you can find pictures on the Internet. I especially enjoyed the view of the Orthodox Church of Maria Magdalena, visible from the top of the hill. 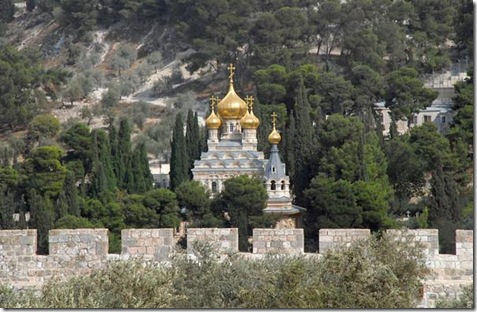 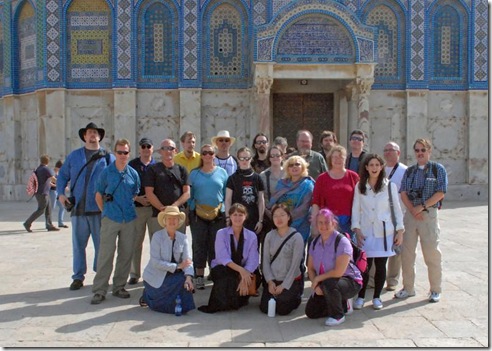 Friends make the best travel companions. I love these people!

Note: Related links below are for further information and interest. Posting does not imply endorsement of the contents! It’s important to know about the conflict and history, from all perspectives.

Like Loading...
‹ Traveling in Israel: Old Jerusalem
It’s not the end of the world if Romney wins…. ›