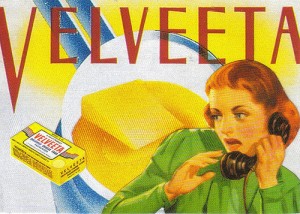 justpaperskater and I exchange stories by giving each other a word which is the seed for the next correspondence. This is my response to her choice of “Velveeta.”

Nearly four years ago, Paperskater gave me a word to write a true story about. That word was “Velveeta.” And after many iterations of this game, she finally had me stumped: no stories about Velveeta came to mind.

Every other word she gave me was instantly associated with some event of my past 50 years. But Velveeta? No. Nothing.

It wasn’t something we bought, and when I first saw it in a massive stack at Star Market, I didn’t know what it was. I knew it was somehow cheese related, but it wasn’t cold, and it came, unsliced, in a box. A big box. Like several times larger than any amount of cheese I’d ever seen.

In the early 1980s, between episodes of The Gong Show and F-Troop, I saw a Velveeta commercial. It was being poured on broccoli (yuck) and nachos (too exotic!) and macaroni (sorry, Kraft Dinner for me).

So no Velveeta entered my life.

And then it did, as I finally remembered.

It was the summer of 1984. I was at a New Hampshire Boy Scout camp (Wild Goose, part of the TL Storer Reservation) for the entire summer, as the assistant leader of an ad-hoc group of kids who came as individuals. The idea was that these kids would form a troop for the week, and I was the Assistant Scoutmaster. And that meant, I was in charge of cooking.

We did not eat in a dining hall. We cooked on shephard’s stoves, metal boxes on legs with a stovepipe chimney. You’d put small wood inside, and cook right on the top. For boiled things, we’d put a large pot on top of the stove. It was all very primitive, but effective, and the fuel was provided by the scouts themselves, though it often required some cajoling to get them to complete this chore. Food would come from the commissary on a daily basis. We had no refrigeration.

One evening, the Scoutmaster was away and I was completely in charge. I had only a small group to cook for, and that night’s menu was macaroni and cheese.

As we were a charity, much of our food came in US Government packaging. We had MASSIVE boxes of raisins, boxes of peanuts, and cans that had very little writing, but featured clip art images of chickens, cows, or pigs. And inside was chopped meat that one supposed was either food for those animals, or food made from those animals. We were never sure, and none had been provided for this night.

For Mac and cheese we had a big box of store bought macaroni, and a large rectangular box labeled “USDA FOOD.”  Good to know. And in smaller letters “PASTEURIZED PROCESS CHEDDAR CHEESE” announced the contents.

Despite never having dealt with Velveeta before, I had seen commercials, and I did know that Velveeta wasn’t actually cheese. It was something with cheese in the title, but not technically cheese. And this was its selling point: it was easier than cheese. You heated it up and dumped it on whatever you wanted. And as I’d never had cheese called “PASTEURIZED PROCESS CHEDDAR CHEESE” I figured, “Oh, this must be Velveeta.”

I was also provided with a gallon of milk, which I assumed was for drinking. I was not supplied with a recipe.

I figured it was an easy night. While the pasta was boiling, I looked at the cheese food, and thought about how best to melt it. I didn’t have a microwave or a small pot, and cleaning melted cheese food out of a pan in the woods did NOT appeal, so I figured, well, what if I just cut up the cheese and dumped it in with the drained macaroni? It’s hot. It should melt. Velveeta is supposed to have a “velvet texture” no matter what.

The cheese cubes became soft, but they didn’t quite melt. I put the pot, now containing drained macaroni and cubed cheese food back onto the heat. The cubes melted a bit more, but drops of oil began to form, and then the cubes became strings. And then they started to burn.

So, being the leader that I am, I quickly came up with another recipe.

No, that’s a lie… there was no other food. It was this or nothing, so I served the glop into our melamine bowls and presented it to the hungry kids. A few of the braver kids poked at it a bit, but I’m pretty sure most of it ended up in the woods. After the dishes were done, some kids raided the peanuts and raisins, and I let them. But I noticed their hungry stares across the flickering lights of the nightly campfire, and I was regarded as “the man” who was definitely keeping them “down.”

Because I had managed to avoid Velveeta for my entire life, a ragtag troop of Boy Scouts went hungry one Saturday night in August, 1984.

If you’d like to know some facts about Velveeta, there is Wikipedia and Mental Floss. And yes, I now eat broccoli and nachos. I still don’t eat Velveeta.

Paperskater, your next word “feathers.”