BIGFOOT LIVES AMONG US!! DEFINITIVE PROOF!!

Skeptics reading this blog might think to themselves “Surely if definitive proof of BIGFOOT had been found it would be the lead story on CNN, not hidden away in an obscure blog.”  I say, if people can watch an entire hour-long BIGFOOT show on the History channel, expecting that at any moment definitive proof of BIGFOOT, then people can read my post expecting the same.  I would say that not every big important story shows up on CNN and the mainstream news. There might have been a war or the President gave a speech.  Certainly real proof of the existence of BIGFOOT could have been something people  missed. Watching  a TV show shot months before, or reading this post, is probably a good way  for everyone to keep up on the latest in cryptozoology.

This foot was found in the neighbors garden.
It is BIG, and it is not a shoe. Several of these were seen, but like most BIG FOOT investigators,
why take photographs of the entire series of tracks? Just one photograph is all you need!

My neighbor, who is a hunter, said he didn’t know what kind of scat this was. My other neighbor said “Well it sure isn’t my dog”. It doesn’t seem to be a bear, my dog sniffed it and growled. No one saw the animal that pooped this, but it appeared the SAME night as the BIGFOOT track.

This bent over branch is on the way to the garden where the BIGFOOT track appeared. Obviously some large and powerful animal bent it. No one saw what animal did this, and no one looking at it (there were 3 of us) could think of an animals that could have. We are all familiar with the woods and the area around us, and one of our group has taken a college level biology course.

MORE DEFINITIVE PROOF! One of our party looked up and saw a broken branch up in a tree. The branch was a fresh break, and at least 10 feet up . No human, unless there was a professional basketball player around, could have broken off that branch. We think that the odds of a professional basketball player being in the woods of Antrim NH are pretty slim. Without any other rational explanation, we have to conclude, this was caused by a BIGFOOT.

BIGFOOT sat here. We can’t think what else could have caused this depression by the side of the road. 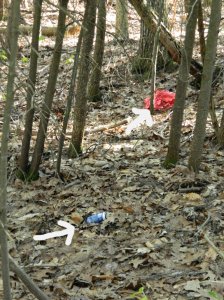 A beer can and a party balloon in the middle of the woods? Obviously no human being would have a party in this environment. Further proof, BIGFOOT lives, and parties, in the woods of Antrim NH

…and don’t forget the video…